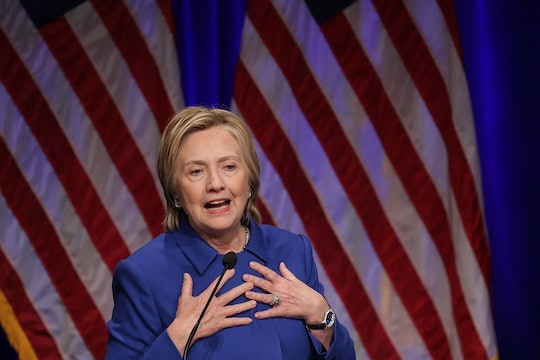 Will Hillary Clinton Run For Political Office? She Plans To "Keep Working"

Despite her post-election day walk in Chappaqua, New York, and a heartfelt speech at a recent Children Defense Fund event, former democratic presidential nominee Hillary Clinton has kept a low profile in the aftermath of her presidential loss. Many supporters, though, are wondering what her future career plans are, or if she even has any yet. Will Hillary Clinton run for political office? Her CDF address challenged: "It’s up to each and every one of us to keep working to make America better and stronger and fairer." It's unclear, though, whether she'll work to make America better politically or by other, non-elected means.

Sure, if Clinton had won the presidency, a 2020 campaign would be par for the course. But the 2016 election upset means that voters are likely to see Trump campaign again in about four years, instead. Clinton's third attempt for the presidency would also occur when the former secretary of state is 73 years old. Clinton's health was the target of many GOP attacks — accusations that would only increase with age, and likely hurt her chances. Trump's health was addressed during the election, too, in a public letter from his physician, but his profile didn't receive the same scrutiny. In 2020, Trump will be 74 years old.

If Clinton decides that another presidential campaign isn't her preferred route, there are still plenty of options as far as public service goes. In addition to her work as First Lady of the United States and the first lady of Arkansas, Clinton served the 67th secretary of state and a New York senator. Though commander-in-chief is off the table, Clinton could seek other important, local offices.

Perhaps, though, Clinton would rather take some time off from campaigning. She could spend some time with her family, including her granddaughter, Chelsea Clinton's 2-year-old named Charlotte Clinton Mezvinsky. Clinton could also devote more of her time to the Clinton Foundation's charitable endeavors. Or, if politics remain first priority, Clinton might spend her time working with her daughter, Chelsea, on Chelsea's rumored run for New York Congress, looking to represent the 17th district where the Clintons reside. This would offer a way for her mother to run vicariously, while Chelsea campaigns to replace 79-year-old Nita Lowey who's expected to retire soon.

Clinton's concession speech put it plainly: "This loss hurts." Though this may be the case, Clinton immediately moved past that, begging: "Please, never stop believing that fighting for what's right is worth it." Regardless of what route she chooses to take, Clinton will hopefully stick to her convictions, showing supporters everywhere what a real fighter looks like.