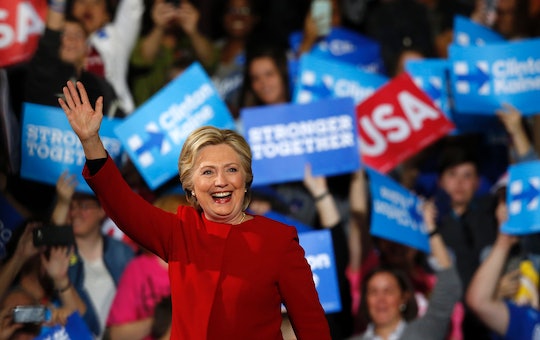 Will Hillary Win If She Wins Pennsylvania? It Depends On Other States

It's no secret that the 2016 election is coming down to a few states that could make or break the entire game for each candidate. There are a few states to watch, such as North Carolina, Florida, and this year, Pennsylvania. Rumor has it that Hillary Clinton could win if she wins Pennsylvania this year, since the state could go either way this time around, breaking with its Republican tradition. Pennsylvania has 20 electoral votes, which doesn't seem like much, but the total any candidate has to hit is 270 electoral votes. A push of 20 votes early on in the night could mean big things for the Democratic candidate.

Pennsylvania isn't a "swing state," but it's a battleground state for sure. Demographically, the state is divided. It's generally thought to be Republican, but in 2012, for example, President Obama beat then Republican nominee Mitt Romney by just 5 percent there. It's a state to watch on Tuesday, which is why both candidates focused some of their last ditch efforts there over the weekend.

Just to talk numbers, right now, with early voting and other predictions, both candidates need to be focusing their voter turnout efforts in Florida, Michigan, North Carolina, Ohio, and Pennsylvania, according to Reuters. Neither one of them has a clear, obvious lead in either state right now, no matter how many times you refresh the page. It really does matter who comes out to vote in Pennsylvania — which does not have early voting — to gauge who might carry the state.

So far, it looks like the aforementioned swing states might be going to Democrats. Right now, Republican nominee Donald Trump would have to win all of those states to beat Democratic nominee Hillary Clinton in electoral votes. But winning just one of those states won't be enough for either candidate; they'd each have to have clear victories in all of them to get to the Oval Office.

Pennsylvania polls close early, along with Florida and North Carolina. If Clinton takes Pennsylvania along with the other early big electoral hauls, supporters might be able to call it an early night. But it's not a given — in fact, if she loses Pennsylvania but takes the other states, which is just as likely as anything else happening on Tuesday, voters will need to watch some of the other, later-to-close states like Utah, California, and Arizona to find out the ultimate result. (I know, its complicated.)

In theory, whoever takes Pennsylvania, North Carolina, and Florida, should win the electoral votes needed to win the election. But it's going to be crazy close and really, there's no saying what can happen on Tuesday in Pennsylvania polling places. That's why they call it a battleground.