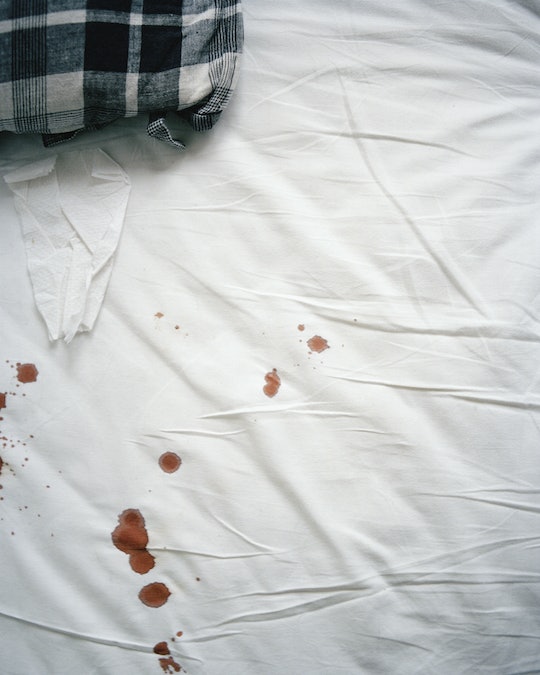 The Truth About Bleeding & Postpartum Sex

By the time your doctor gives you the clearance for postpartum sex (and you're emotionally and physically ready for it), you realize it may have been a while since you've been intimate with your partner. It may also have been a while since you have seen your period so, naturally, you may be wondering "will I bleed the first time I have sex after having a baby?" If your postpartum bleeding has officially stopped and you're looking to physically reconnect with your partner, it's important to have an answer.

According to The Bump, it is indeed possible (and maybe even likely) that you will start bleeding again after postpartum sex . One of the not-so-fun things about sex after baby is that the increased physical activity may cause you to start bleeding because the sex irritated your cervix or the sex has caused uterine cramping.

Whether you gave birth the "natural" way or through a C-section, your cervix has been through a lot in the past nine months. Additionally, postpartum sex is quite likely to cause irritation there, and there may be some light bleeding because of that. On the other hand, if you have an orgasm from sex after pregnancy (and you should consider yourself quite lucky), your uterus will contract and that may also cause some light bleeding.

The good news: Because bleeding after postpartum sex is relatively common, it's not a huge deal if you experience it. According to Bundoo, you might notice that your postpartum bleeding picks up again after the first time you have sex. As long as it's not too heavy and you don't feel dizzy, it's OK. If there is quite a bit of bleeding, then you need to rest and then call your doctor or midwife.

Although there are many other reasons you may bleed after giving birth, bleeding after postpartum sex is certainly not out of the question. Use precautions like putting a towel under you and your partner during the act, and check in with each other's comfort levels throughout. If you start to experience too much discomfort or pain, stop and contact your healthcare provider. But if you're not feeling too bad, then keep enjoying yourself.

More Like This
Why Your Vagina May Be Itchy After Sex & What To Do About It
10 Moms On Why They Exercise
My Slowest Marathon Ever Is The One That Makes Me Most Proud
What To Expect After A Hysterectomy: Dos, Don’ts, & Tips To Heal
What Parents Are Talking About — Delivered Straight To Your Inbox