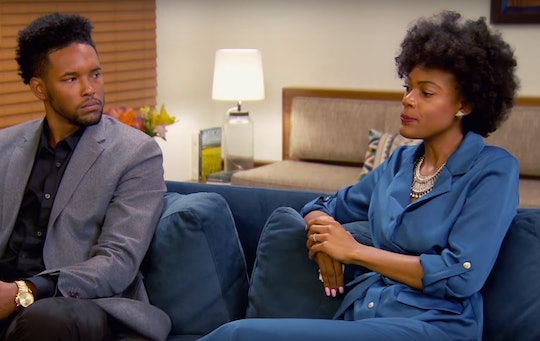 Although fans were rooting for them from the start, Keith and Iris didn't have an easy go at it on Married at First Sight Season 9. Forget the common issues the couples on this show have after meeting their intended seconds before they say "I do." Iris and Keith’s main hurdle to overcome was her virginity, which was always a boulder standing between them. Despite their best efforts and Iris’s attempt to stick it out together, Keith asked her for a divorce. But because they have so much potential otherwise, though, fans are still hoping that Iris and Keith get back together after Married at First Sight.

Earlier this season, Keith and Iris talked about how lucky they were to have been matched together. In one episode, Keith told Iris, "If I was going to be married to a stranger, this is about as good as it gets right here." Still, Iris’s sexual inexperience stood in their way from moving forward and staying together. Up until decision day, they still hadn’t consummated their marriage and they both considered her virginity to be a big deal.

Naturally, it remained an issue in the back of their minds for the duration of the eight week interim period. And even though Iris was willing to see where their marriage cold go, in the end, it was too much for Keith. Still, fans are hoping the Married at First Sight reunion shows a change of heart on Keith’s part.

Although Keith and Iris never got intimate to the point where she lost her virginity to him, their breakup and Keith’s divorce decision was one that not only shocked fans, but also the experts. During their decision day meeting, Dr. Pepper Schwartz and couples therapist Viviana Coles both shed tears over the breakup and Keith’s final decision.

"My heart is broken for Iris," Coles said in the decision day episode. "To not have somebody reciprocate those feelings of love is a really tough thing to endure."

Iris added that it was "devastating" to her for the marriage to have not worked out. It takes more than just wanting the marriage to succeed in order for things to work out in the end, but their marriage had so much potential. If they are somehow able to get past Keith's issue with Iris's virginity now, after Married at First Sight, then there’s hope they got back together. If it's still something that will gnaw at Keith, however, then they are better off separated.

In the promo for the Season 9 Married at First Sight reunion, Iris tells Keith she was willing to share the experience of losing her virginity with him. But through all of their obstacles relating to her virginity, they were never able to get there. It’s possible, however, that the ship has sailed and Iris has moved on since her split from Keith.

In an interview with RealitvWithBee, Iris said she tried to open up to Keith sexually, but didn't feel much encouragement on his part, which made things more difficult for her.

"It’s challenging to open up to someone who hasn’t opened up to you. Nor can I be vulnerable with someone who has not been vulnerable to me," she explained in the interview. "I have found it so difficult to grow sexually when he isn’t trying to help me do that. I want to be more vulnerable with him, but it’s hard when it feels I’m doing all the work by myself."

As much as fans might want to see a happy ending after the fact for Keith and Iris, if they can't move past the prior issues their marriage presented, then they probably won't get back together.