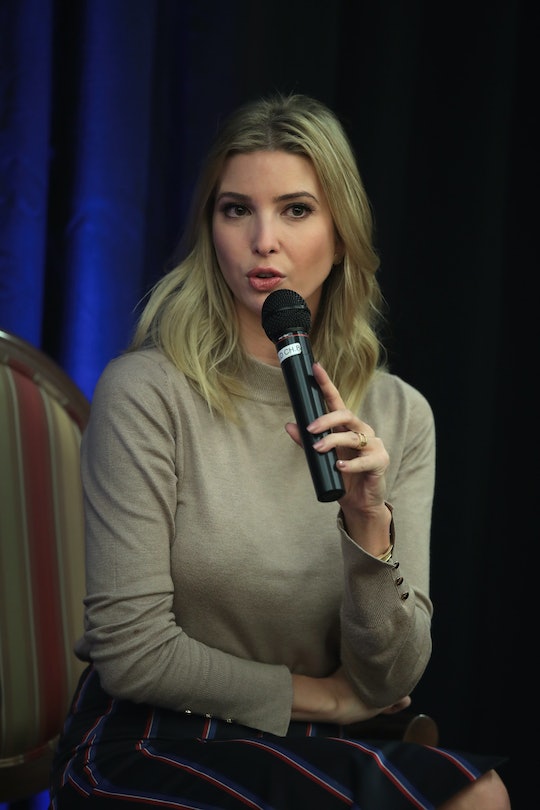 Will Ivanka Trump Go Into Politics? She's Not Saying Anything Yet

Her father is about to become the 45th president of the United States and let's face it, he owes a decent portion of the credit to his daughter. It seemed as though every time President-elect Donald Trump ruffled feathers, his daughter Ivanka Trump was there to smooth things over. While her brothers campaigned hard for their father, Ivanka Trump campaigned smart. She managed crises, looked polished and poised at every turn, all while running her own company and raising two children. No small feat. So the real question here is, when will Ivanka Trump go into politics? Because I'm feeling pretty certain that's where things are headed.

Unfortunately for her supporters, for now, Ivanka doesn't seem to be having any of it. When asked by 60 Minutes correspondent Lesley Stahl if she was seeking a job in her father's new presidential administration, Trump said, "No. I'm going to be a daughter."

Admittedly, being the oldest daughter of President-elect Donald Trump does appear to be basically a full time job. But Ivanka went on to explain her political belief system to Stahl, even though she's totally not going in to politics. She said:

I’ve said throughout the campaign that I am very passionate about certain issues. And that I want to fight for them. Wage equality, childcare. These are things that are very important for me. I’m very passionate about education. Really promoting more opportunities for women. So you know, there’re a lot of things that I feel deeply, strongly about. But not in a formal administrative capacity.

In other words, "no, I'm not going in to politics. But if I decided to try I would nail it."

While Ivanka Trump might not be ready to throw her hat into the ring, her father feels differently; The Trump team allegedly asked for full security clearance this week for Ivanka, Donald Jr., and Eric Trump. The Trump children can't officially hold any office within the White House due to nepotism rules, but for them to have top security clearance they would have to be labeled national security advisers to their father. His three oldest children were named to Trump's transitional team, whose priority it is to guide Trump to the White House, so they — Ivanka included — may well be on their way.

Ivanka has long been seen as one of Trump's greatest political assets, especially by the president-elect himself; It was his daughter, not his wife, who introduced him when he announced his bid to run for president in front of Trump Tower. And it was Ivanka who introduced him and gave a glowing speech at the Republican National Convention in July.

In that speech, Ivanka managed to speak on a few issues that hit home with most Democrats; paid parental leave and wage disparity, for instance. (Could Ivanka still be a secret Democrat at heart?)

Which has me wondering: What if 2020 was a father versus daughter election? And we thought this election was tough to take.