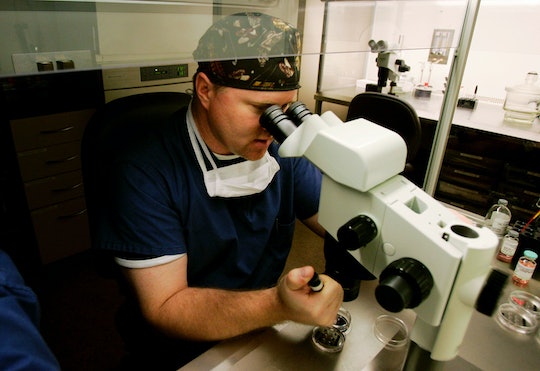 Infertility is a painful issue. Families looking to get pregnant in the face of infertility often climb an ever-changing, uphill battle that must feel insurmountable. Particularly when looking into the possibility of in vitro fertilization; the cost alone is enormously prohibitive, not to mention the emotional stress. Americans struggling with infertility need to have answers about whether or not IVF will be covered under the American Health Care Act, now that House Republicans have moved the bill on to the Senate.

As of 2014, 15 states have legislated that insurance providers offer coverage for infertility treatments such as IVF, according to the National Conference of State Legislatures. Those states are: Arkansas, California, Connecticut, Hawaii, Illinois, Louisiana, Maryland, Massachusetts, Montana, New Jersey, New York, Ohio, Rhode Island, Texas and West Virginia. Despite the fact that the Centers for Disease Control and Prevention reported a total of 61,000 babies were born in 2008 through ART (assisted reproductive technology), and that 11 percent of women aged 15-45 suffer from infertility, the Affordable Care Act does not cover IVF treatments. If the American Health Care Act does get approved by the Senate and replace the Affordable Care Act (which is a very big if), would the new health care bill cover infertility treatments?

Unfortunately, it doesn't look as though the AHCA would provide infertile Americans with any form of federal IVF coverage. As it does now, coverage would be determined by the state you live in, whether or not your employer has chosen to include fertility treatments within their insurance coverage. Unless, of course, infertility is determined to be a pre-existing condition. In which case, you could see your insurance coverage under the AHCA vastly reduced.

The MacArthur Amendment, which was added to the health care bill after the initial AHCA could not get enough votes in Congress, would allow states to opt out of Obama-era federal protections that denied insurance providers the right to charge more for people with pre-existing conditions. This could mean that anyone with a pre-existing condition (keeping in mind that pregnancy is already considered one) could be charged considerably more for their health care, or denied coverage altogether, according to CBS News.

The cost of IVF treatments ranges anywhere from $8,000 per treatment; keeping in mind many women need to go through more than one cycle, take medication, travel... generally speaking, a successful round of IVF can run upwards of $20,000, according to Resolve.

The biggest hurdle may not be the fertility treatment, but the cost.

It doesn't look as though the hurdle is going to get any better under the AHCA.