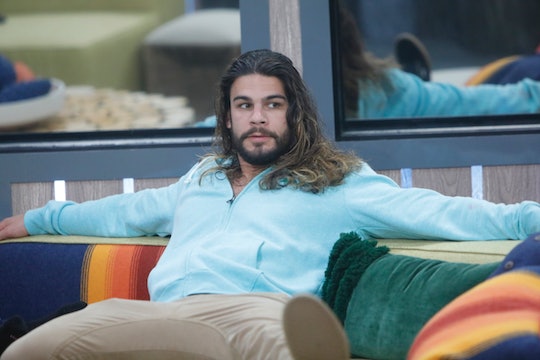 'Big Brother' Fans Are Actually Petitioning For One Contestant's Removal

As a former subscriber, I know that Big Brother live feeds reveal a lot more about houseguests' characters than the edited episodes CBS airs. I don't have time to watch live feeds this season, but I have watched evidence that shows Jack Matthews making racist and misogynist remarks in the house. So the entire internet and I are wondering if Jack will get kicked out of the Big Brother house as a consequence of his behavior.

In one clip, he seems to refer to Puerto Rican contestant Jessica as "Consuela." Jack has also said about Jessica, "I flirt with her just to make her feel good about herself." Um, she's married dude. (For what it's worth, Jess and her husband are both gorgeous.) Flirting is sometimes a part of the Big Brother game, but no matter what kind of attention Jack is giving her or getting back, she definitely isn't relying on him for a self-esteem boost. You can't see, but I'm rolling my eyes along with you.

It doesn't end there, because Oprah Mag also reported that on live feeds, Jack threatened black contestant Kemi on camera saying he was going to "f*ck her up" in a veto competition, which is still not as explicitly violent as when he reportedly said he wants to "stomp a mud hole through her chest."

There is also video evidence of Kemi telling other women on the show that she can sense he is trying to manipulate her even though they hardly talk.

CBS did not immediately return Romper's request for comment.

It's all worrisome because if Jack's behavior were gameplay he would probably address her directly. Big Brother is no stranger to a strategic villain, but these comments are mostly personal. Jack has referred to Jessica and Kemi as "maggots" and made remarks about Ovi, a man of color on the show, as captured on live feeds such as calling him "brown flame."

His behavior has led fans to create a petition calling for Jack to get evicted from the show, which cites his most aggressive comment toward Kemi, as reported by Oprah Mag.

My gut is telling me that he'll stay, because Big Brother is no stranger to racism amongst its cast members and in many cases the houseguests have stayed on the show, though producers will talk to contestants about their behavior (CBS production has talked to Jack, according to Reality Blurred). Season 15, for example, became notorious when contestants Aaryn, GinaMarie, and others were caught using racist and homophobic slurs to describe their housemates. Though the houseguests were not removed from the show, CBS did air a supercut of many of their offensive remarks in one segment on the show, and Julie Chen Moonves took Aaryn's eviction as an opportunity to call her out for her behavior.

I hope that Jack's behavior is addressed or that one of the people he is talking about gets power and can evict him soon. I don't think it's likely that production or CBS will pull Jack out of the house, but at least it's becoming clear that he is not a guy people want to see stick around.