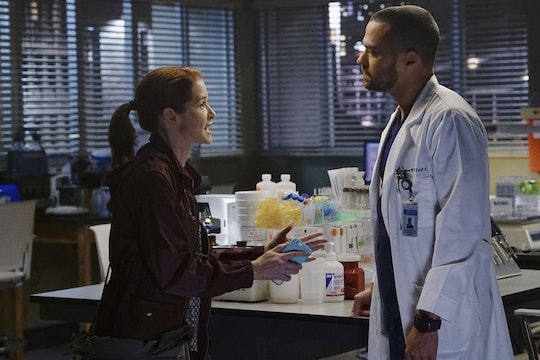 Will Jackson Get Custody Of April's Baby On 'Grey's Anatomy'? These Two Are Going To War

Since the "Japril" movie episode of Grey's Anatomy and the discovery that April was pregnant, Jackson and April's relationship has been rocky at best. These two can't seem to agree on anything...and the appearance of Katherine Avery in the mix hasn't been helpful. On last week's episode of Grey's, Katherine told Jackson she got enough information on April to sue her for custody of the baby, leaving us all to wonder if Jackson would really sue April.

Well, at the start of this episode it seemed like Jackson wasn't going to listen to his mother. He hated that she butted in on something that doesn't really involve her, and once again told her to stay out of it. That didn't stop her from suggesting some good lawyers, however. Still, Jackson seemed adamant to handle the April baby situation in his own way (which was probably the smartest decision he's made since this whole debacle began).

Unfortunately for Jackson, April overheard Katherine talking to Dr. Webber about how she hoped Jackson would sue April for custody of the baby now that they had all the information they needed to do so. Upon hearing that and learning that what April thought was a nice, friendly conversation with Katherine was really a stealthy interrogation, April is furious.

Plus, it doesn't help that April and Arizona are currently handling a case with a 14-year-old girl who's pregnant and doesn't want her mother to know. April, whose pregnancy was outed to Jackson by Arizona, understands the girl wanting to keep her pregnancy a secret, but once April starts thinking like a mother, she can't help wanting to tell the girl's mother the truth. Dealing with all the parallels between her patient and her personal life, it's not surprising then that April does something rash.

At the end of the episode, we see Jackson get served papers. Turns out, April decided to get a restraining order against him. How she thinks this could stop him from suing her for custody is unclear to me. Maybe she thinks if there's a restraining order against him, no judge would give him custody? Who knows. Either way Jackson is pissed. Especially because he had no intention of suing April.

April quickly figures this out when she gets back to her apartment and discovers a nice crib there waiting for her with a note from Jackson that basically says he wants to work it out with her so he can be in the baby's life. How sweet! Too bad April possibly just derailed their chances for peace, at least for now.

Will April be able to explain her mistake to Jackson? Will Jackson even care to hear her explanation? We'll just have to wait until next week's episode of Grey's Anatomy to find out.