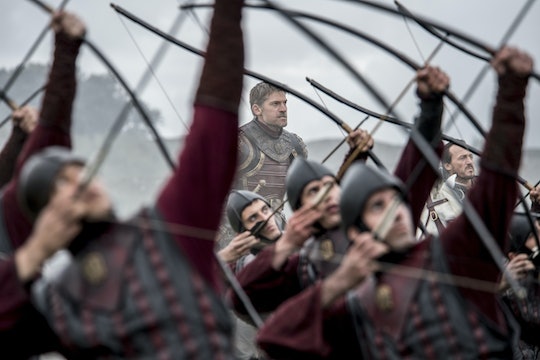 Macall B. Polay / Courtesy of HBO

Jaime Lannister's Chances Of Survival Has Just Been Teased

Game of Thrones once again upped its epic factor last Sunday with the fourth episode of its seventh season, "The Spoils of War." There was a lot to get excited for: the long-awaited Stark reunion, the return of Bronn to our screens and our hearts, and the first dragon action Westeros has seen in centuries. But that truly stunning final battle scene has fans wondering: will Jaime Lannister survive on Game of Thrones? The closing shot of "The Spoils of War" showed Jaime sinking into the water, weighed down by his heavy armor. And while nothing's for sure yet, one of the Episode 5 promotional photos recently released by HBO has me worried. (But then again, when am on not worried while watching this show?)

Sure, Jaime has faced some criticism in the past by both critics and fans (yours truly included) due to his lack of action regarding Cersei's increasingly questionable behavior. But that doesn't mean I want him to die, either. Like many GoT fans, I've just been waiting a while for him to get started on becoming the great hero we all know he could be if he just made better life choices. It seems unfair to cut off Jaime's story before that happens, right?

But that's Game of Thrones for you. Among HBO's promo photos for Episode 5, "Eastwatch," there's one image of Cersei sitting at the edge of her bed, not looking too happy.

Could it be because she just heard news of her brother's death? I really hope not, but it's possible. Whether or not Jaime survived that ordeal, it seems unlikely he'd be making it back to King's Landing anytime soon. Perhaps this is just a picture of Cersei absorbing the news that Jaime's army lost, or maybe she's simply realizing how very alone she is at this point, without even Jaime by her side.

Game of Thrones established in its first season that no one is safe from being killed off (except, I guess, Jon Snow, and Beric Dondarrion, and whoever else the Red Priests choose to resurrect). So maybe Jaime isn't coming back. But to be honest, despite that photo of Cersei, I'm not especially worried about it. Sure, they might hold us in suspense for an episode or two, but Game of Thrones has made it clear that you have to actually see a character die to know that they're dead. Case in point: The Hound, whom Arya left for dead but was rescued off-screen by a kindly septon.

In a recent New York Times interview, actor Nikolaj Coster-Waldau wasn't giving anything away. Of that final shot of Jaime drowning, all he had to say was: "It seems impossible to survive that. Luckily, he’s not wearing the Kingsguard armor, which is made of brass." From the interview, it doesn't seem as though that scene will be Coster-Waldau's last, but you can never know for sure.

I'd really like to see Jaime make it out of "The Spoils of War" alive — maybe he'll emerge from the water a changed man. Coster-Waldau himself hinted at that in the same New York Times interview: "I think he’s getting to the place where he’s questioning, 'what’s the point of all this? Power for the sake of power?'" Let's hope his words are an indication of what's going to happen later on. It's about time Jaime started questioning things a bit.

Game of Thrones airs Sundays at 9 p.m. ET on HBO.