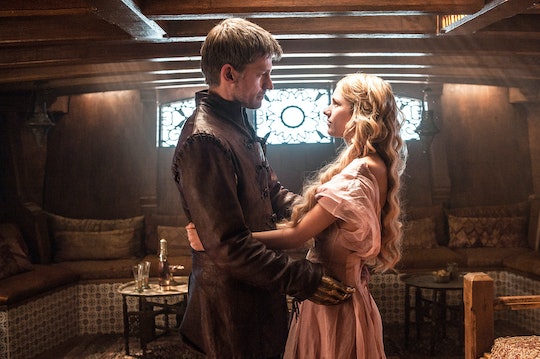 Will Jaime Wage War On Dorne In 'Game Of Thrones'? He Might Have To

The Season 6 premiere of Game of Thrones brought with it enough heartache for the Lannister family to make us actually feel bad for Cersei, and that's saying a lot. But the one Lannister (besides Tyrion) that has long since captured our hearts, Jaime, is probably going to turn to the dark side this season, thanks mostly to the Sand Snakes of Dorne. So will Jaime wage war on Dorne on Game of Thrones now, especially with Prince Doran Martell kaput?

If his conversation with Cersei on the Season 6 premiere was any indication, then yes, Jaime will start a war with Dorne. That is, if they don't do it first. The only thing stopping Oberyn Martell's daughters, the Sand Snakes, and his lover, Ellaria Sand, from starting a war on the Lannisters themselves was Prince Doran, and now that they've done away with him themselves, they're pretty much free to be as crazy and unpredictable as they've already shown themselves to be.

It's not like anyone can blame them for their hatred of the Lannisters, since the royal family has easily made enemies in every part of the Seven Kingdoms. But it's hard to not agree with Jaime if this time around he proves to be a lot less calm and a lot more Cersei-like in dealing with Dorne. The women did, after all, kill the daughter he fathered with Cersei, the daughter who was also the second of their children to be poisoned.

Not surprisingly, Jaime sends a letter at once to Prince Doran, telling him of Myrcella's death and seeming to calmly inform the Dorne prince that he has to wage a war against Dorne and the Martells now that his daughter was a victim of their scheming and maliciousness. In the letter, Jaime Lannister tells Doran what we all suspect. That he will indeed have to go to war, and mostly because he knows that is what Cersei will want of him.

That's not to say, of course, that Jaime himself won't want to get revenge, since yeah, she was his illegitimate child too, but knowing what we know about Cersei and her devotion to her children above any and everything else, she will be the one to press Jaime to start an all out war on Dorne.

"The Princess Myrcella died by poison on our return journey. I suspect [Ellaria] not you, but my sister will demand war. I doubt Ellaria’s head will [appease her but] it is a start, a long with your nieces. Your son cannot stay in King’s Landing. I am sending him back on the same ship."

This also explains why Prince Trystane was not in King's Landing with Jaime and Myrcella's body. But what we all know, and what poor Jaime has no knowledge of yet, is that Doran is already dead, making it impossible for him to give over Ellaria's head, or those of her crazy ass Sand Snake daughters. And there we will have our Lannister-Dorne war.