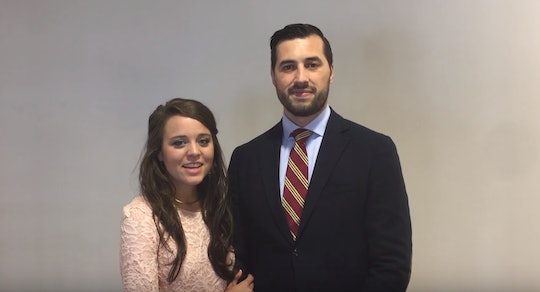 Jinger Duggar's Due Date Is Around The Corner, But Where Will She Give Birth?

Anyone who has tuned in to the TLC reality show, Counting On, or is familiar with the Duggar family knows that family and home means everything to the 19 siblings. This is very clear by the fact that only one of the 19 children, Jinger Duggar, lives out of state with her husband, Jeremy Vuolo. With Duggar set to give birth within the upcoming weeks, fans are likely wondering if Jinger Duggar will give birth in Texas, her adopted home, or in Arkansas, where she grew up and where her family lives.

Fans have been anticipating the arrival of Duggar's baby for months since she and her husband, Jeremy Vuolo, announced that they were expecting their first child together right after the new year, according to People. And since then, she has been allowing fans to follow along with her journey on Instagram, where she routinely posts updates of her bump (and its growing size).

But now that Duggar's due date is presumably around the corner — her baby's estimated time of arrival is "soon," according to Vuolo's newest Instagram post — it's fair to wonder about Duggar's birth plan. Perhaps, more specifically — where she will give birth.

It's very likely that she will give birth in her adopted state of Texas, where she relocated to be with her husband, who is a pastor in Laredo, according to People. When Duggar permanently moved to Texas in 2017, it was to help her husband with his "ministry work," according to People. "We have just so perfectly adapted, it's been incredible," Duggar told People at the time. "It's the biggest blessing."

Since Duggar and Vuolo have been spending all of their time in Texas, that means their doctors are probably in Texas — including the doctors who have been there for Duggar's pregnancy check-ups and plan to deliver her baby. In fact, in an interview with Us Weekly in March, Jinger pretty much confirmed that she would be giving birth in Texas because certain family members would have to travel to be in the delivery room with her. Duggar said, according to Us Weekly:

I want my mom definitely at the birth of our child and so I've invited her and Jana as well and Jill, she wants to make it. So they're invited, but I don't know how many will be able to make it. My mom, at this point, is the only one who's probably going to be able to make it for the birth.

But since that hasn't been confirmed, whether or not Duggar gives birth in Texas, rather than Arkansas, or gives birth in a hospital is all purely speculation at this point.

Still, you can't blame fans for wanting to know everything about Duggar's birth plan, especially since it feels like it's all been happening so fast. With Duggar's reported due date being in July, according to In Touch Weekly, there are only a matter of days before Duggar and Vuolo welcomes their first child, a daughter, into the world.

Although Duggar was able to call Arkansas home for so long, Texas is her new home — it's where she lives, and, presumably, where she and Vuolo will start her family.