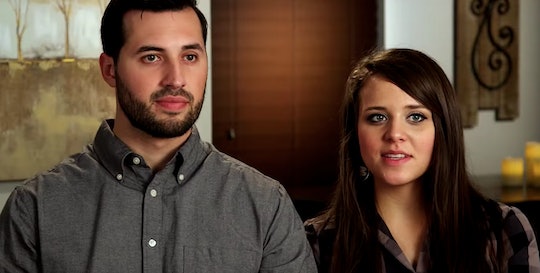 Will Jinger Duggar’s Baby Be On 'Counting On'? Here's Why It's A Possibility

Jinger Duggar is a finally a mom! The Counting On star has been transparent about sharing her pregnancy journey with fans, keeping her Instagram account updated with all of her exciting milestones. Now, as she shared on Instagram, Jinger gave birth to a healthy baby girl named Felicity on July 19. Amid all of the excitement, some fans could be wondering: Will Jinger Duggar's baby be on Counting On? Though the parents haven't disclosed whether or not their newest family member will be featured on the show, it's safe to assume that fans will at least get a peek at baby Vuolo.

On Thursday night, Jinger posted a photo with a text overlay on Instagram, reading, "Dear sweet girl, Welcome to the world. ~ Mom." The couple shared a more detailed announcement on their website. "God is so kind! Jinger gave birth to Felicity Nicole Vuolo this morning at 4:37 am," Jinger and her husband Jeremy Vuolo wrote. "Felicity weighs 8lbs. and 3oz. and is 19.5 inches long. Both mom and baby are healthy, doing great, and resting well. We are very thankful for her safe arrival and look forward to life as parents!"

Back in January, the couple confirmed they were expecting with a similarly sweet announcement. "We are so happy to announce that we are having a little baby girl!" they told People in a statement at the time. "We could not be more excited and are eagerly anticipating meeting our little lady this summer. We especially love thinking forward and realizing that she will have excellent role models in both of her grandmothers, who cannot wait to shower her with love.”

Throughout her pregnancy, Jinger has been open with fans about the amazing highs and inevitable lows that come along with growing a little human. She told Us Weekly back in March that she was surprised by how tired she was. "I was never a napper, like having to take a nap, and now it’s like, ‘Ooh! I think I want to nap every day!’” she joked. She continued to explain that her husband, Jeremy, was also very involved in helping to take care of her since the beginning:

Jeremy also jumped in and he was there. He got me take out food a lot because I did not want to step foot in the kitchen. It made me nauseous, so he did that for that season and that was very, very good... I’m feeling really good at this point! I’m passed any and all morning sickness. It’s kind of — as someone labeled it — the honeymoon phase of the pregnancy because you’re not super big, but you’re enjoying the pregnancy.

TODAY reported that Jeremy has also shared his excitement for becoming a dad. "The past fourteen months have been the best of our lives as we have had the wonderful privilege of beginning our journey through life together in marriage," he wrote on the couple's blog. "We both looked forward to the joys of marriage but neither one of us fully understood just how amazing the start of this journey would be."

Of course, it's possible that the Vuolos will share footage of baby Felicity on Counting On given that Jinger's siblings have done so already. For example, of the Duggar kids that are on the show, almost all of them have given fans a peek into their lives as new parents. TLC explained on the official show description that the whole point of the spinoff is to show the elder Duggar siblings as they "begin their lives as adults and start families of their own."

Most recently, Joe and Kendra shared the delivery of their first son, Garrett, on the show, via a two-part special, and the show has also covered everything from the birth of Jessa's two kids to Jinger's courtship to her wedding to Jeremy. It's fair to assume, then, that given all the other milestones that have been featured, baby Felicity could make an appearance. (In the latest teaser for the new season that TLC released a few months ago, Jeremy and Jinger hinted that they would have an announcement about a pregnancy, which did eventually air.)

Granted, the Vuolos didn't opt to actually share the process of their delivery for cameras (though it is likely that some footage will be incorporated in the show, just based on how other deliveries have gone). With that said, there's tons of hope for fans that as Jeremy and Jinger begin their lives as new parents, we'll get to see all of the special moments that make the Duggar kids as endearing as they are.