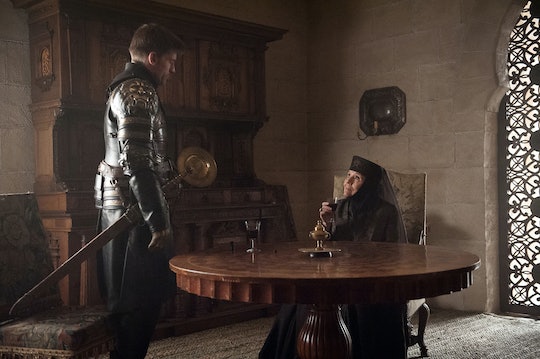 Another installment of Game of Thrones has come and gone, sadly further depleting our remaining episode stockpile. But boy was it a satisfying one, especially if you're like me and you prefer to watch Jaime actually doing things, instead of just sulking around the shady corners of the Red Keep. I've talked before about the probability of Jaime killing Cersei, and that incredibly epic final scene between Jaime and Olenna Tyrell made fans realize an interesting possibility: if he is the one to do it, Jaime may be using Joffrey's old sword to kill Cersei. Poetic, right?

Fans haven't seen much of Joffrey's sword, the charmingly-named "Widow's Wail," since Joffrey was last seen wearing it at his ill-fated wedding. Jaime's actually had it on him for a while this season, but some of us need that extra reminder from Olenna Tyrell because, let's be real, all of those swords look pretty much the same. The return of Widow's Wail has got some fans on Reddit speculating that Jaime will use it on Cersei. The sword's name alone kind of fits, considering that Cersei is King Robert's widow. It gets better when you remember that Widow's Wail is actually from Ned Stark's old Valyrian Steel sword, Ice. After Ned was killed, Ice was melted down and reforged partly as Widow's Wail — given to Joffrey as a wedding present — and a second sword that Jaime gave to Brienne, who named it Oathkeeper. That's right: Cersei could die by Ned Stark's old blade.

The theory that Jaime will take the sword isn't actually a new one — Redditors like jdroa have been predicting that Widow's Wail will be the death of Cersei for at least a year now. But other Redditors, like lumerianstar, have taken it one step further to suggest that Widow's Wail is actually Lightbringer, the sacred sword wielded by the Azor Ahai — which would make Jaime that prophesied savior. According to legend, the Azor Ahai plunged his sword through the heart of Nissa Nissa, his wife, and this sacrifice gave the sword all kinds of superpowers. Of course, if that theory pans out then Cersei would probably be Nissa Nissa. It all fits together quite nicely.

Of course, if you know your GoT media you know that pretty much every main character has a credible Azor Ahai theory behind them. Most notably you've got Jon and Daenerys, but also some less expected players like Sam, the Hound, and Ser Davos, among many others. The Jaime theory is just as likely as any of them, though many fans view the reintroduction of Widow's Wail simply as a reminder of the true significance of Valyrian steel — that it can be used to kill White Walkers. So who knows? Maybe Jaime's got an even bigger purpose than killing Cersei: joining the fight in the Great War against the true enemies to the north. Either way, I expect interesting things will finally be coming for Jaime in the future.