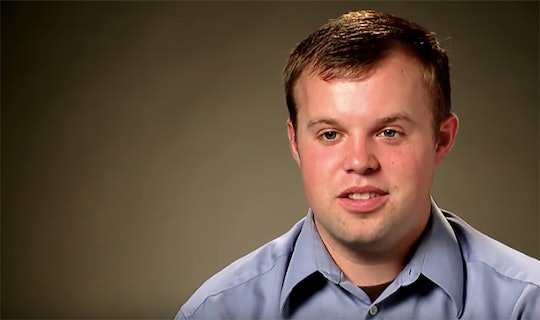 Counting On star John David announced his courtship to nurse Abbie Burnett in July, following one month of courtship. Needless to say, fans are very excited for the reality star who once claimed he'd be a "bachelor till the rapture," and people want to know everything about his upcoming wedding. But one of the more pressing questions about the thrilling nuptials concerns whether John David Duggar will have a best man. Considering all of John David's siblings had a best man at their weddings, it's a very reasonable question to ask. So, who will stand by John David's side as he trades vows with Burnett? Fans have a lot of good guesses about who the lucky person could be.

John David, the second eldest son of Michelle and Jim Bob Duggar, never aspired to get married right out of the gate. John David knew he'd find love eventually, and he took his time to get there by Duggar standards. Luckily for John David, his patience paid off, and he found love with Oklahoma native Burnett in June. The two were friends before things turned romantic, a good sign for any long-term relationship. And just one month after the couple announced their courtship, they confirmed their engagement. Aww.

Now that the special day is in the works, it's time to speculate about who will be included in the wedding party, especially where it concerns John David's best man. Here are the top contenders based on fan theories and my own embarrassing level of knowledge about the Duggar family.

When 19 Kids & Counting abruptly ended in July 2015, many fans wondered how Jim Bob would fare in a world without reality TV cameras. It's clear Jim Bob is quite the ham, to put it mildly, and it seems like he's always angling to get back on TV. So, it's definitely possible Jim Bob will convince John David to let him be the best man for this reason. Plus, Jim Bob and John David are very close.

"I think it's going to be Jim Bob or Jana...or Joe. You have to think about the fact that Josh left the house, what, ten years ago? JD was 18/19 then, right?" a fan theorized on the Duggars Snark Reddit forum "So, his formative adult years and bonds are tied to Joe (if any of the boys)."

"Jim Bob is a STRONG possibility," another person agreed.

In a perfect world, Jana would be John David's wing man for his special day. The two are twins, after all, and it would be a sweet homage to their strong bond. And in my opinion, they both seem to be a bit disillusioned with the never-ending Duggar machine of wedding and birth specials.

Fans seem to like the idea of Jana as best man — in fact, most people want her to take on the role.

"If John David picks Jana for his Best Man, he was even more damn cool than I thought," a person wrote. "What a way for him to say F traditions and to honor his sister at the same time."

"It should be Jana," someone else commented.

When John David announced his engagement, many people shut down the idea of his only other brother — Josh — stepping in as best man. Simply put, it's logistically impossible because Josh isn't allowed to appear on TLC anymore.

Oh, and how can I forget the time John David shaded Josh for his infidelities? "One of the hardest things I had to tell my older brother was, ‘I don’t want to be like you anymore,'" John David said on an episode of Counting On.

Still, I won't rule Josh out. TLC's camera crew is pretty skilled at hiding Josh's face at special family events, and they could always blur his face out. "It’d definitely be interesting to see how they try to hide Josh from viewers when he’s the best man," a fan remarked.

Plus, the Duggars are very much bound by tradition. I wouldn't be surprised if John David picks Josh out of a sense of responsibility and pressure from his parents.

Out of the entire Duggar clan, my money is on Joe for best man. Both Joe and John David are quiet, responsible, and steady. The brothers are often pictured doing activities together, like the time they helped build their siblings a tree house.

"I agree with others that it would probably be joe, but it makes me wonder about who Jana would have?" a commenter penned. "Since Jill isn't on counting on anymore? Maybe her friend Laura."

"Joe and JD are most alike IMO, they are the laid back guys, go with the flow, quiet and one-liner sense of humor," a person chimed in. "They seem close."

Guess fans will have to wait and see.

Although I don't think John David would go outside of his family for a best man, a fan presented an interesting theory about why he might pick one of Burnett's brothers:

John David may choose one of Abby's brothers and she may choose Jana out of respect for the "twins" thing. I believe Jana will have a friend stand in as her maid of honor...or the oldest of the youngest Duggar daughters...is it Johanna? OR Jana will have Anna do it.

Makes sense, right? I could see this potentially happening.

Of course, it doesn't matter who John David picks in the end. What's important, first and foremost, is the love John David has for Burnett.