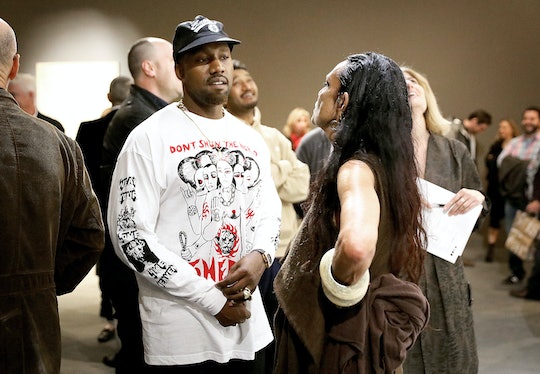 Will Kanye West Make An Appearance At The 2017 VMAs?

It's no secret that Kanye West has a bit of a rocky history with awards shows. Ever since his infamous interruption of Taylor Swift's acceptance speech back in 2009, West has proven himself to be one of the most controversial celebrities of his generation. And as the 2017 MTV Video Music Awards are officially here, many are wondering: Will Kanye West be at the VMAs? Well, it doesn't look too likely, although knowing the rapper, a surprise appearance wouldn't be too shocking.

So far, neither West nor his wife, Kim Kardashian, have made any sort of statement about whether they will be attending this year's VMAs. True, West is nominated for Best Choreography for his "Fade" music video, but considering that the rapper is usually up for numerous awards, one nomination might not be enough to warrant an appearance by the mega-celeb.

And while it will certainly feel a little off to not witness another one of West's epic speeches, it's also completely understandable for West to sit this one out. The past year has been kind of intense for him and his family, and if West needs to take some time to himself, then that's totally OK. After all, West and Kardashian are in the midst of trying to expand their family, and if that doesn't merit some alone time, nothing does.

In fact, speaking to The Hollywood Reporter about the possibility of a third child via surrogate, Kardashian said, "I hope so. There have been a lot of things said and Kanye and I have not confirmed anything. We're definitely trying. We are hoping so."

Clearly, the couple is in the middle of something important. And despite all the rumors swirling around about the Kardashian-West surrogate, the couple has every right to stay home tonight. However, if you're missing your usual dose of Kanye-isms, fear not.

Because even though West might not be at this year's VMAs, his speech at last year's show still reads as memorable as it did a year ago, but his opening statement is especially iconic: "I am Kanye West. And that feels really great to say, especially this year."

And who could forget the year before, at the 2015 VMAs when West announced his future career goals. "And yes," he concluded his speech, according to MTV. "As you probably could have guessed by this moment, I have decided in 2020 to run for president."

So, yeah. West might not be at tonight's VMAs, but his spirit certainly lingers these hallowed halls — because after all, does anyone else perfectly capture the meaning of the VMAs more than West himself?