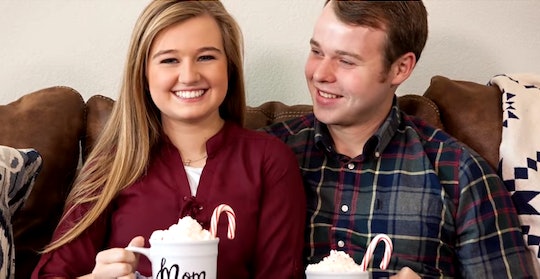 Will Kendra Duggar Have A Home Birth? Here's Why She Could Opt For This Duggar Family Tradition

The Duggar family definitely has their own way of doing things, particularly when it comes to bringing babies into the world. First off, they seem to like to bring lots of babies into the world. But most of the family also welcomed their little ones via home births. While some fans think that the most recent addition to the Duggar family, Joy-Anna and Austin Forsyth's son Gideon, was born at the hospital, what about the next baby? Will Kendra Duggar have a home birth, or will she opt to have her baby with husband Joseph Duggar at the hospital?

Joseph and Kendra Duggar certainly have a history of ticking off all of the traditional Duggar family markers when it comes to their decision making. The two met at church before courting, according to TLC. Then Joseph Duggar asked then 18-year-old Kendra Caldwell to marry him at his sister Joy-Anna's wedding in May (not sure if that's a Duggar family tradition, of course, or just a mere case of seriously stealing someone's thunder). After getting engaged, Kendra and Joseph were married in an intimate ceremony in September. Just four months later in December, the young couple announced they were expecting their first child.

TLC shared a video of the Counting On stars sharing their news on YouTube, where Joseph said:

I've always dreamed of having my own family, and it's really just kind of surreal that it's actually here.

He also had some ideas about the sex of the baby, "I kind of think it's going to be a boy, but either way I'm happy just to have a baby," he said in the video.

As for Kendra, she "hoped that the baby would be patient like Joe," and said she'd been given the best advice to plan for her baby: "Get lots of sleep."

Earlier this month, Joseph and Kendra shared the news that Joseph was right, they were indeed expecting a boy. The expectant father said in the gender reveal video that he was excited to teach his son things that he does, while Kendra was excited to dress her baby up in "little bow ties."

While Joy-Anna might have given birth at the hospital, it's unclear at this point where Kendra plans to have her son. The Duggar family has a history of home births, and it seems likely that Kendra could very well follow in their footsteps. Michelle Duggar had her first five children at the hospital, according to the Duggar family blog, but gave birth to her sixth (daughter Jinger, who is also expecting her first child) at home. She had several of her subsequent children at home, and many of the Duggar offspring also had home births.

Daughter Jessa Seewald gave birth at home with both of her sons, Spurgeon and Henry, but was rushed to the hospital for a blood transfusion after her first birth. Jill Dillard wanted to have home births, but had to have an emergency C-section after going through 70 hours of labor with oldest son Israel. She gave birth to son Samuel in the hospital.

Whether Kendra plans on giving birth at home or not might be anyone's guess, but if I were a betting woman I would say she'll follow in the traditional Duggar footsteps. Because anyone who has watched Counting On can see that she's a sweet girl who really just wants to please people. And if a home birth means making her in-laws happy, perhaps she'll decide on that for her birth plan. Or I could be wrong. If Joy-Anna (maybe) decided to have baby Gideon at the hospital, maybe Kendra will do the same. As long as she's having her baby in a way that makes sense to her as a woman, that's what counts.