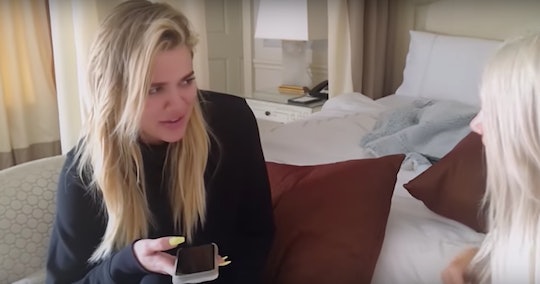 Here's What Khloé K. *Could* Decide To Do With Her Role On 'KUWTK' After She Gives Birth

The Kardashian and Jenner sisters don't have what the rest of us would really consider as "normal" careers. They run makeup and clothing lines, model, and, of course, film reality television shows. Filming is really stressful and it has to have an impact on their day-to-day lives, which is why it's entirely possible that Khloé Kardashian could leave Keeping Up With The Kardashians after giving birth. Though, there are many reasons why she wouldn't leave it and perhaps she'd just take a longer hiatus than usual — here's why.

More Like This
Angela Kinsey's Daughter Dressed As Her Character From 'The Office' & Wow, The Sass!
Patrick Star's Mom & Grandpa Make A Quick Cameo In The Teaser For His Nickelodeon Show
The Perfect Wisdom Of Mare's Mother On 'Mare Of Easttown'
14 Great TV Episodes To Watch With Dad On Father’s Day

Earlier this year, there was a rumor going around, based on an interview with an anonymous source in Life & Style that Khloé had asked her mom to take some time off from filming. "When Khloé originally said she wanted to take a long break, Kris [Jenner] thought she meant she would be taking three to four months off like Kourtney and Kim did." The source added, "When Khloé told her mom she wanted to six to 18 months off from filming KUWTK, Kris went ballistic." But other than that rumor, Khloé hasn't said anything about giving up her role on the show to be a full-time mom off cameras.

Think about it: Her mom and all of her sisters have set quite a precedent when it comes to juggling work and family. They really do live to work, so it's likely Khloé will stay on the show and find a way to integrate the new baby into it how she sees fit as she goes. It might just be a matter of timing.

KUWTK has been renewed through 2020, but a Season 15 premiere date hasn't been announced yet, according to Variety. She's due in late March or early April, so unless they start filming this spring, Koko will probably be camera ready when they finally start production later this summer.

That's when they normally start, at least according to The Cut's Mariah Smith, who tracks when the fam films and how they orchestrate their big moments. Khloé is also on Revenge Body, remember, but that hasn't been renewed yet for another season, so she'll have time to consider whether or not she wants to keep going. And think about how she'll manage both shows with a new baby.

There's another thing to consider, too. Location, location, location. Khloé reportedly has been spending the majority of her time in Cleveland, where her boyfriend and father of her baby girl, Tristan Thompson lives, according to E! News. In fact, she was spotted just this week heading to the colder climate in preparation to give birth, the outlet reported. A source told People, "Khloé is in Cleveland and plans to stay there until the baby is born. She is too far along to fly back and forth."

Although she plans on giving birth in Cleveland, sources close to the family previously told Entertainment Tonight that they planned on continuing their "bicoastal life," jetting back and forth from Ohio to Los Angeles. Of course, that's a lot easier when you don't have an infant to deal with, so it's likely she'll just figure things out as she goes along. She's allowed to change her mind, right?

The show primarily films in Los Angeles, but also wherever the family happens to be, like on trips to New York City, Las Vegas, and all of their family vacations. For the two prior seasons, Khloé and Tristan appeared on and off on the show, even orchestrating visits to Cleveland as plot lines. Who knows, maybe Kim and Kris will come visit Khloé this summer to see the newborn for next season of KUTWK, too.

Even when Khloé was going through some of the hardest times in her life, like back when she was with Lamar Odom or handling trolls, she was on camera for the family's signature show.

Which is why I'm thinking that there are so many options about how to fit postpartum Khloé into the show, provided she feels up to the task, that don't have to involve her going into hiding or making some extreme decision to give up reality TV forever. Then again, after a baby comes, everything changes. Who knows what she'll end up doing once she's in the thick of new mom life.