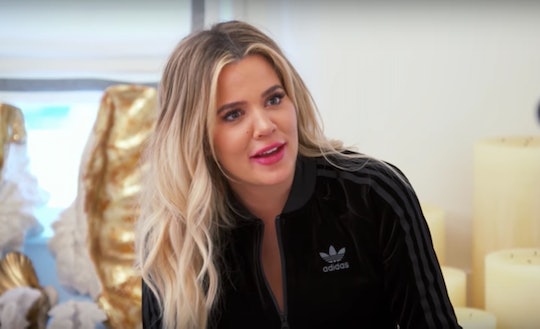 I am endlessly fascinated with the Kardashian and Jenner women and what they do every day. Judging from their show and Instagram Stories, it looks like so much fun. Unboxing wonderful gifts designers send them, making smoothies, doing their makeup, and then working out. Like, that's the life, right? But they all also have their own side businesses and work, too, which has me wondering if Khloé Kardashian will take maternity leave after she gives birth to her daughter, likely next month.

Khloé films Keeping Up With The Kardashians and her spinoff, Revenge Body, and she also runs her clothing line, Good American. So, yeah, she keeps busy. But those jobs are pretty untraditional, meaning she doesn't go into an office every day like most people, which is why she probably won't take maternity leave in the traditional sense. Then again, she hasn't said anything about it either way, so who knows what she'll decide to do.

There was a rumor, according to Life & Style, that Khloé asked for some time off from filming for a longer maternity leave. "When Khloé originally said she wanted to take a long break, Kris [Jenner] thought she meant she would be taking three to four months off like Kourtney and Kim did.... When Khloé told her mom she wanted to six to 18 months off from filming KUWTK, Kris went ballistic," an anonymous source told the tabloid. Of course, this is just a rumor.

KUWTK has been renewed through 2020, according to Variety, but a Season 15 premiere date has yet to be released, so how much Khloé will or will not be on camera is still TBD. Also, Revenge Body Season 2 is currently airing and there's no word on a Season 3 renewal yet, so it might actually be perfect time to take a break if she chooses to.

After Kim had Saint, she took to Twitter when the Daily Mail ran a headline that said she was in a self imposed "diet exile" after welcoming her second child. Kim tweeted at the outlet, "Isn't it just called maternity leave? If coming to NYC support my husband & have so enjoyed my time at home with my babies & family." So even though they don't have traditional jobs, the Kardashians do take some version of maternity leave from their work to recuperate and bond with their new baby. Khloé likely will, too.

She'll probably have tons of help with the new baby, whether it's her sisters Kourtney and Kim Kardashian, who are already experts at the whole newborn thing, her mom, and likely a nanny or two. So she could definitely find time to get some work in from home and get back to her intense workout schedule, which has been one of her biggest concerns throughout this whole pregnancy.

She told Ellen DeGeneres, according to People, that she was putting off maternity clothes for as long as possible:

At the beginning, the first trimester is the worst and no one knows you’re pregnant yet and you feel the most uncomfortable. I think once people know you’re pregnant, you get all the excuses. Hopefully I look pregnant, not just fat. It’s hard for me to breathe right now. I’m gonna try to not wear maternity clothes as long as possible.

Khloé gets a lot of heat for making fitness and working out such a central part of her life, but it makes sense when you think about it. Growing up in the spotlight, Khloé has often been trashed by viewers for being the "fat" sister. Getting pregnant and having your body change is hard enough on its own. Being self conscious about doing it in front of the entire world, as Khloé is doing, is very understandable.

Her biggest fear, which her sister Kim also shared during her pregnancy, was getting stretch marks. She tweeted earlier this year, "So far no stretch marks. So I'm happy about that the perks of being chubby previously. Lol my tummy knows how to stretch." Although it's not true that being previously chubby will help you prevent stretch marks, her fans went wild on Twitter in solidarity.

Fans chimed in to warn her that stretch marks can come after pregnancy and while breastfeeding, while others reminded her to not worry too much about gaining weight. Khloé responded to the body positive fan, "Yes girl! Yes!!! I'm focused after. At the moment I'm enjoying the changes lol."

So if she takes some time off, it will likely be to make sure she gets her workouts in, although she has been training this entire time. For her, it's as much about the physical as it is the mental aspects of working out that has her hooked. She wrote on her blog, according to Entertainment Tonight, about her pregnancy workouts:

I’m so lucky that I’ve been able to stay active during my pregnancy. If I’m not doing something, I just feel off, ya know? I can’t beast out in the gym the way I could six months ago — and, let’s get real, it’ll be a few more months before I can again — but I’m definitely doing what I can.

In a few weeks, Khloé's world will be entirely different with a newborn, so hopefully she'll take some time for herself to soak it all up and indulge in some self care. Whether it's an official maternity leave or not.