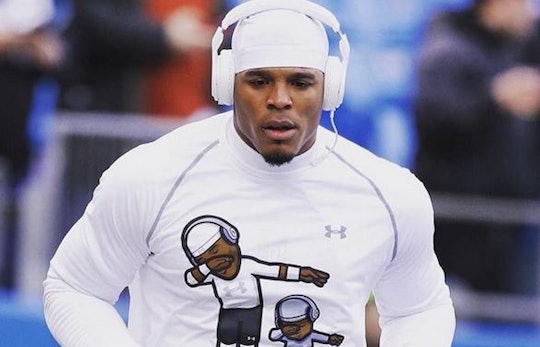 Will Kia Proctor & Cam Newton Get Married? Well, It's Not Really Anyone's Business

The eyes of the entire world are fixed on Carolina Panther's quarterback Cam Newton leading up to Sunday's Super Bowl 50. And even though the way he plays the game is brash and open, he's a guy who likes to keep his life off the field out of the public eye. Now that some of that attention is spilling over into Newton's closely guarded personal life, everyone is wondering about Newton's girlfriend, Kia Proctor. The couple just had a baby boy, named "Chosen" together on Christmas Eve, a fact that was kept a pretty well-hidden secret until about a week after the baby's birth. So naturally, everyone wants to know: Will Kia Proctor and Cam Newton get married? Well, that's not really anyone's business but the couple's.

Is there any chance the most high-profile player in football would consider getting down on one knee during the Super Bowl and top off his incredible season with yet another milestone? Could he follow up a year in which he completely dominated the National Football League and welcomed a son into the world with a big old wedding?

It's not anyone's business, but that's never stopped any of us from taking part in a bit of wild speculation about the lives of the rich, famous, and super good looking and wanting to join in on the fairy tale. Here's the baby announcement that seemed to catch fans off guard.

He added that he wanted to keep the baby news quiet for the sake of privacy and not to distract from his team's quest for the Super Bowl.

But with the hype of the Super Bowl at its peak, it was only a matter of time until Proctor became a focus of both fan and media attention. The issue of Newton and Proctor's engagement is such a hot topic, in fact, the site OddShark is tracking the odds on whether Newton will propose to Proctor on the field after the big game.

Here's a snap of Proctor decked out in her Panther's gear.

We don't know much about Proctor, who is 27, besides the fact that she and Newton have been dating since 2013, according to Heavy. She's currently a model and has a daughter from another relationship. Here they are pictured together. Pretties!

Proctor reportedly made an early name for herself as a stripper under the name "Hazel." But the mother of two has her hands full now raising and growing her family. In the meantime, fans of the duo all just have to wait and see if Newton plans to put a ring on his lovely lady over Super Bowl weekend. But, if he doesn't, that's the couple's decision, and no one else really has a say in it.