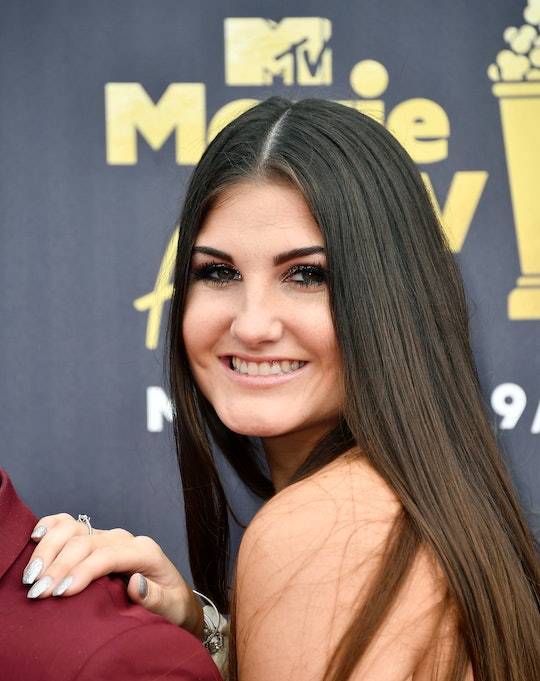 There Could Be A Love Triangle Brewing On 'Floribama Shore'

Watching people hook up shows like Floribama Shore is like watching Murphy's Law of Reality TV in action. As in, anyone that can hook up, will hook up. That may not be true for everyone on Floribama Shore, but slowly, the cast members are turning to each other for romance. Since Season 1, Gus and Nilsa were a potential thing but now, it seems, Kortni has her eyes set on him. So will Kortni and Gus hook up on Floribama Shore?

At the beginning of the season, Kortni introduced the gang to her boyfriend, Logan. But it wasn't long before he and the other guys were throwing punches and she grew tired of the drama he brought. Well, the extra drama he brought, that is. Kortni realized that it wasn't a healthy relationship and at the end of the first part of Season 2, Logan and the guys in the Floribama Shore house got into it. When the season picks up Thursday night, viewers will get to see the big brawl unfold, and they’ll also get to see a newly single Kortni.

As the previews have suggested, she may be getting closer to Gus of all people. This is the same Gus who’s still in a friends with benefits situation with Nilsa at this point. Obviously all hell is about to break lose, but I don't think Kortni is romantically interested in him.

In one scene during the Floribama Shore catch up episode that aired on MTV, Nilsa says, "You’re gonna go for the one guy you know I’m into?" After, Kortni tells Kirk, "B*tch, I don’t give a f*ck about girl code." Those might sound like fighting words and the start of a love triangle, but I feel like it’s more so Kortni going on the defensive because of Nilsa’s automatic assumptions.

At the end of the first part of the season, Kortni did climb into bed with Gus, but it was because she had nowhere else to sleep. Gus told her to stay in bed with him to see what Nilsa would do and the whole "experiment" had trouble written all over it. When Nilsa got upset, Kortni said, "You could have gotten in bed with Gus, Nilsa, so don't be mad at me for wanting to sleep in a f*cking bed instead of the floor." I mean, she’s not wrong.

Now that she’s single, Kortni is probably ready to enjoy herself, but I haven’t seen any sparks fly between her and Gus. In fact, Gus and Nilsa will likely be the ones doing more hooking up than anyone for the rest of the season.

In a recent Instagram Live video, Gus told inquiring fans that "the Nilsa and Gus saga is not over" and "there's a lot more coming." In one of the promos for the second part of Season 2, Nilsa and Gus are shown in bed together doing a lot more than cuddling this time. Although fans will have to wait to actually see what happens, it appears that Gus and Nilsa are back on as friends with benefits and the benefits just got a lot better.

So it certainly seems less likely that Kortni slides into the middle of things. And to be honest, the last thing she needs is more relationship drama after her tumultuous relationship and the way things went down between Logan and her roommates. I expect Kortni to do her thing in true Kortni fashion without all of the drama that a love triangle would make. Granted, it’s the kind of drama that makes for good TV, but Kortni and Gus have never seemed like a potential match before anyway.