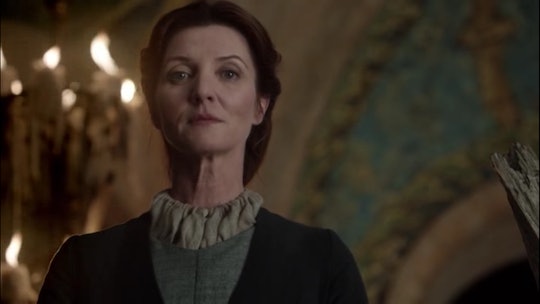 Will Lady Stoneheart Appear In 'Game Of Thrones' Season 6? The Books Suggest It May Happen

If ever there was a woman in search of a little revenge, my money would be on Lady Catelyn Stark. When Catelyn Stark's throat was slit in Season 3 of Game of Thrones, she sank to her death believing all of her children were either dead or about to be killed. Brandon, Rickon, Sansa, Arya, and Robb, all of her children, gone. (Spoilers ahead.) In the book A Storm of Swords, Catelyn is resurrected by Beric Dondarrion and becomes Lady Stoneheart, hell bent on revenge. So... how cool would that be if that actually happened in the show? Will Lady Stoneheart appear in Game of Thrones Season 6?

Well, there certainly seem to be some hints that Lady Stoneheart might make an appearance. Lady Catelyn did make an appearance in the trailer as one of the faces in the House of Black and White's Hall of Faces, and there has been loads of chatter about the Brotherhood Without Banners making an important reappearance in Season 6 — you know, Thoros of Myr, Beric Dondarrion and their ragtag band of merry men all worshiping the Lord of Light and such. And if the show follows the story of Lady Stoneheart from the books at all, Arya's Direwolf Nymeria will bring Catelyn's corpse to Dondarrion, who gives her the kiss of life and dies so that she can live (which seems overly generous until you consider he looked super sick of almost dying the last time Thoros of Myr brought him back).

Catelyn would then be resurrected as Lady Stoneheart, which probably isn't the best news for the Lannisters, who send their regards (I hate you, Roose Bolton).

The only tiny glitch is, Lady Stoneheart is not like Catelyn. She is a cold-blooded, ruthless woman who looks like a White Walker. She takes over the Brotherhood Without Banners and goes about the countryside looking for anyone who might have helped the Lannisters (including Petyr Baelish). In A Feast for Crows, Lady Stoneheart even turns against loyal Brienne of Tarth, calling her a traitor for carrying the Valyrian sword Jaime gave her, Oathkeeper. Oddly, Lady Stoneheart doesn't seem to be in any major rush to seek out her actual children, but who am I to judge an undead mother?

There have been a few fan theories about Sansa becoming Lady Stoneheart. She did jump into an icy river with Theon to escape Ramsay Bolton, after all. And she could go intensely crazy after the horrific few years she has had. Who wouldn't? But there is no way to know yet.

I, for one, would be interested to see a Lady Stoneheart story line in Season 6. Although if Catelyn is coming back, and Jon Snow is resurrected as well, can she please be nicer to him? Even one of her ice cold, undead hugs would make that poor boy feel all warm and toasty, I bet.