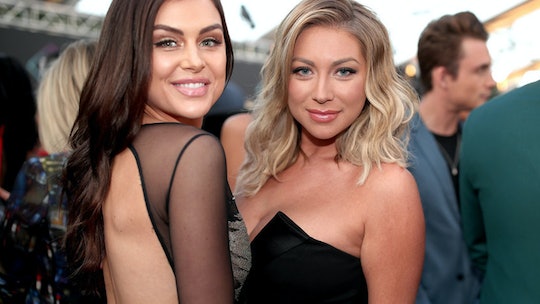 How Long Will Fans Have To Wait To See Lala's Wedding On 'Vanderpump Rules'?

People find love in the most unlikely places, but on set of a reality show might take the cake. Fans of the Bravo reality series Vanderpump Rules were excited when Lala Kent announced her engagement to movie producer Randall Emmett. And while fans didn't meet Randall until the Season 7 premiere, they've been obsessed with the couple's relationship ever since Lala started referring to him as "her man" a few years before he appeared on the show. So will Lala's wedding be filmed for Vanderpump Rules? Given that Rand and Lala have been keeping their relationship out of the public eye, fans probably shouldn't expect an exclusive wedding video via the Bravo series.

Lala and Randall met when Lala was filming her first season of Vanderpump Rules at the SUR Restaurant in 2015. While the couple kept their relationship under wraps until Randall's divorce to Ambyr Childers was finalized and they went through a very public breakup in Vanderpump Rules Season 7, Randall and Lala got engaged in Sept. 2018. And although fans got to see the couple's engagement through social media, Randall and Lala decided not to film their engagement for Pump Rules.

“I still enjoy that little bit of privacy that we have, as much as I'm so liberated by the fact that I can talk about him and our relationship,” Lala revealed to Entertainment Tonight. "I can talk about the proposal, but the way that it is in my memory is, like, you could never document it and make it feel the way that it actually felt.”

When it comes to Vanderpump Rules, it looks like Randall and Lala will be approaching their wedding the same way as their engagement. In an interview with E! News, Lala confirmed that her wedding won't be filmed for Vanderpump Rules.

"My wedding will not be on Vanderpump Rules," Lala revealed. "I'm just funny about stuff like that. I want to keep it in my memory and I don't really care for it to be documented in that way."

The Pump Rules star also claimed that while the producers have discussed filming their wedding for the Bravo series, both Lala and Randall are not on board.

"It's been tossed around in a very subtle way," Lala continued. "Not only am I dead set on it not being filmed, but I know that Rand would never want it to be on Vanderpump."

Fans might be disappointed that they won't get to see Lala and Randall's 2020 nuptials on the Bravo reality series, but there will still be plenty of Vanderpump Rules cast members at the wedding.

During the interview with E! News, Lala shared that her bridal party consisted of her childhood friends that she's "known from Day 1 back in Utah." However, when asked if she invited the cast of Pump Rules to her wedding, Lala immediately revealed that there was no question — her fellow SURvers would be there.

"My cast members are like family to me," Lala said. "We've been through a lot so they'll definitely be there. Not everybody, but most of them."