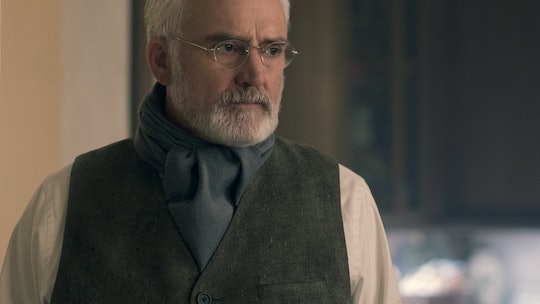 If Commander Joseph Lawrence continues to go down this path on The Handmaid's Tale, he could be a dead man walking by Season 4. Since Gilead's founding father helped Emily escape in the second season finale and June took up a post in the Lawrence household in Season 3, fans have been confused by the Commander's morally ambiguous character. But as he continues to side with the resistance, fans wonder if Lawrence will die on The Handmaid's Tale. And quite frankly, I wouldn't be surprised if he does.

The trailer for Episode 11 briefly highlights Commander Lawrence's first brush with death in the series — and it could be at the hands of the woman he loves. In the preview, Eleanor has Lawrence at gunpoint as June walks into the room.

"You should go," Lawrence says, his voice stricken with panic.

"Shut up," Eleanor screams at Lawrence. She turns to June and says, "You were brutalized, all because of him."

So will Eleanor kill Lawrence in the upcoming episode, "Liars?" It's possible. The clip fades to Hulu's Handmaid's Tale logo, which means fans will just have to wait and see. However, something tells me that this moment might not be the end of Commander Lawrence just yet.

Speaking with TV Guide, executive producer Warren Littlefield delved into June's character arc during Season 3 and her boldness in the final three episodes. He also hinted that Commander Lawrence would be around to help June see her plan through.

"What you'll see between now and the end of the season is her being less obedient to authority, being more assertive, and she co-opts Commander Lawrence into her vision and her plan," Littlefield said. "And that's just starting to unfold, but it's a snowball rolling down a mountain. It's just getting bigger and bigger and bigger, and she's going to be a force to be reckoned with."

Littlefield then teased there's more development to come in June and Lawrence's relationship.

"I think [...] it's a tipping point and a turning point in that relationship, and it's unexpected," Littlefield revealed. "I'm excited about what we're about to present."

Honestly, I don't know whether I should be excited or afraid for what's to come. And although it seems Commander Lawrence has more story to tell in the last few episodes of Season 3, I'm still uncertain about the longevity of the character.

In the Jul. 24 episode titled "Witness," Eleanor revealed that Lawrence could not leave Gilead because he was considered a war criminal. "He can’t cross the border," Eleanor told June. "He would be jailed for the rest of his life or killed. And he would deserve it.”

Later in the episode, June and Lawrence were forced to perform the Ceremony. This showed Lawrence's days are numbered in Gilead, but it prompted him to offer June what he could — a truck to get out. Nonetheless, when June told Lawrence he could escape with the kids and his wife, he dryly said, "I'd be a hero."

Is it me or does it feel like Commander Lawrence won't make it out of Gilead alive? While I don't know what's to come in the future, there's plenty to be worried about, but fans will just have to hold on tight for a few more episodes.