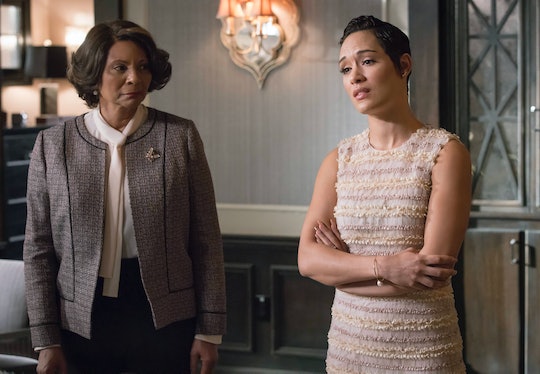 Lucious' Mom Is In A Lot Of Trouble On 'Empire'

There are several characters on Empire I wouldn't want to mess with. There's Shyne, Lucious' longtime rival, who wanted to carry out a plot to kill him. There's Andre, who was also in on the plot to kill his own father. There's Giuliana, who murdered her husband within her first five minutes on screen. Out of all the characters, though, there's one that I'm most terrified of: Leah Walker. On Wednesday night's episode, "Full Circle," some of her actions were finally revealed to the Lyons. So will Leah return on Empire? She was sent away by her family and Claudia.

Leah has never really been portrayed in a positive light on the show. Flashbacks of Lucious' past often showed her being abusive, and it still affects him in the present. Leah also suffers from bipolar disorder, and hasn't really taken the proper steps to cope with it. She always hated Tariq Cousins, Lucious' half-brother, because of who his parents were. Last season, that hatred came to a head when she fatally stabbed him to death. She was frustrated that Lucious was actually getting closer with Tariq; this newfound friendliness was because Lucious knew Tariq could find who kidnapped Anika and Hakeem's baby. Tariq did in fact solve the mystery, but Leah killed him before he could actually tell anyone.

Not only did Leah kill Tariq, but she framed Anika for it. In the Season 4 premiere, "Noble Memory," Anika is shown in jail. But on Wednesday's episode, she's desperately trying to find her way out. She and Thirsty try to frame it as self-defense against Tariq — even though she's not guilty to begin with. Meanwhile, Leah is at Lucious' home claiming that his nurse, Claudia, is a witch. She thinks that she put Lucious under a spell, and that's why he can't remember anything. Leah even attempted to hold Lucious under water (as a sort of baptism? I don't even know what her aim was), which made Lucious flash back to her abusing him as a child.

Once Cookie moves back into Lucious' house, she sees how dangerous Leah is. She threatens to kill Claudia, and at first Cookie doesn't take it seriously... but Leah keeps talking. She reveals that she killed Tariq and made Anika take the blame for it — so she has no problem killing off Claudia as well. The next time viewers see Leah, she's taken away by psychiatrists. So will Leah return to Empire, or will she be out of Lucious' life forever?

Leah keeps coming back into Lucious' life. She was presumed dead at the start of the series, only to reveal herself back in Season 2. She had survived a suicide attempt but was then "locked up," and upon her release was left on the street. Lucious actually saw her when she was homeless, and had her put in a home where Thirsty and Andre found her years later. I wonder if she's going back to a similar home, or if doctors will take a different course of action.

Leah committed murder and then framed someone else for it, so she could go to prison for life. Leah's fate is obviously unknown now, but for some reason I have a feeling that she'll be back. She's become a fixture on Empire, and I think she would need a more dramatic ending than simply getting whisked away. Perhaps she will be seen in jail herself, or in another home, or in court. Regardless, I'm curious as to how Anika will get justice for herself — and how Leah will be charged with Tariq's murder.