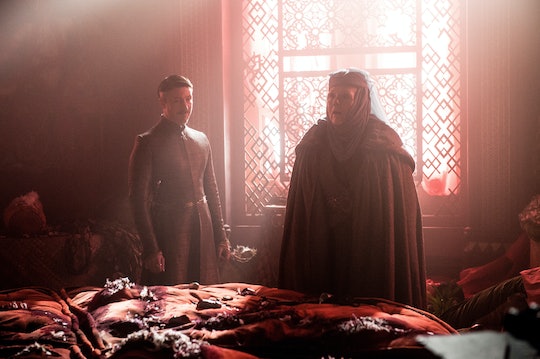 Will Littlefinger Be In 'Game Of Thrones' Season 6? What Would It Be Without Him?

Lord Petyr Baelish, Lord of Harrenhall and Lord Protector of the Vale (also known as Littlefinger), was setting himself up for some pretty tasty plot twists in Season 5 of Game of Thrones. As ever, the spymaster was switching sides left, right, and center, always with this feeling like he knew everything that was going to happen three seconds before it actually did. But will Littlefinger be in Game of Thrones Season 6? There don't seem to be as many clues to his fate as we might like swirling around the internet.

Littlefinger was featured briefly in one of the trailers. Which is a good thing, because it is nearly impossible to imagine a season of Game of Thrones without the chilling, manipulative Lord Baelish. After all, he was working towards something fairly major at the end of Season 5, right? That dude is always up to some sort of nonsense, but it looks like everything is coming together for him after years of plotting. There must have been a good reason for him to marry Sansa off (his little Lolita fantasy/Catelyn Stark brought back to like all wrapped up in one Freudian bundle) to the despicable Ramsay Bolton. For someone who knows everything that happens in the Seven Kingdoms, could Baelish seriously not have known what he was doing to Sansa, sending her off to marry a psychopathic rapist?

He truly could not have known, I don't think. Littlefinger doesn't care about many people, but Sansa is different. As he tells her in Winterfell's crypt, she will become Wardeness of the North once Stannis and the Boltons go to war. She knows what he is all about, and he is grooming her for something more than just awkward smooching.

It's not just Sansa, either. Petyr was summoned back to King's Landing by Queen Cersei herself, where he made short work of her situation with the High Sparrow. He has the Tyrells and the Lannisters pitted against each other while little King Tommen hides out in his bedroom cuddling with Ser Pounce, counting the hours until he can get it on with imprisoned Queen Margaery again. (Although I fear Ser Pounce saw some unmentionable behavior going on between the randy King and Queen, I hope he's not too scarred).

So recap of where Littlefinger is standing — he has positioned Sansa to become Wardeness of the North (although she has escaped, not sure how he's going to roll with that bit of news), he has brokered a deal with Cersei to use his warriors of the Vale to take Winterfell for the Lannisters and his brothels have been destroyed, but I think he was moving on to bigger and better things. He has offered both Cersei and my favorite bad-ass chick of the whole series, Lady Olenna Tyrell, a way to defeat each other, which means all of their in-fighting should leave the playing field open to the master manipulator. Few people stand in his way, or even have any idea that they should be standing in his way.

Season 6 should be an interesting one for Petyr Baelish. Where is Varys when we need him?