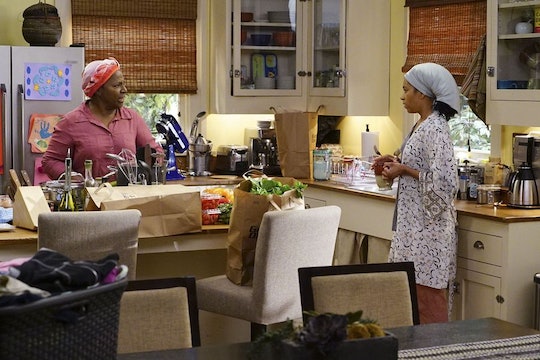 Maggie May Learn A Big Secret On 'Grey's

After meeting Jackson's dad on the last episode of Grey's Anatomy, the show is now switching gears by bringing Maggie's mom Diane back to Seattle. When Diane was last in town she had a consultation with Jackson, who discovered she had breast cancer. Though Diane planned to tell her daughter the news, Maggie instead got upset with Diane and so she left before revealing the news. Now that Diane is back in town, will Maggie find out her mom has cancer on Grey's Anatomy?

Based on the episode description, it looks Maggie will have to learn the truth once and for all. Apparently, Diane's health has deteriorated and the doctors are at odds about what to do about it. If all the doctors are discussing Diane's case, there's no way they'd be able to hide the truth from Maggie, especially since (based on the promotional photos), Diane will be staying at Meredith's house while she's in town. The real question is: how will Maggie find out the truth? Will her mom tell her or will it slip out some other way?

No matter how Maggie finds out the truth, it's sure to be heartbreaking for her, especially because of how they left things the last time Diane was in the area. Obviously Maggie didn't know her mom had cancer at the time, but the fact that she accused Diane of becoming this whole new person since her divorce, a person Maggie didn't like, there's no doubt Maggie will fill immensely guilty for the way she acted.

However, based on the promo pics, it looks they're able to work through their issues and enjoy a family dinner with the other doctors from Grey Sloan Memorial Hospital. The only question that remains is how dire is Diane's current health situation? Will Maggie lose her mom by the end of the episode? While I hope not, this is Grey's and Shonda Rhimes has never shied away from killing off a character.

Even if Maggie and Diane really reconcile, they may not have that much time left together, which would make this reunion even more heartbreaking. Hopefully the doctors are able to come together and find a way to save Diane, but I wouldn't get my hopes up. This may be the end for Diane and, unfortunately, Maggie may have to prepare herself to say goodbye to her mom.

You can find out Diane's fate when Grey's Anatomy airs on Thursday, March 23 at 8 p.m. ET on ABC.