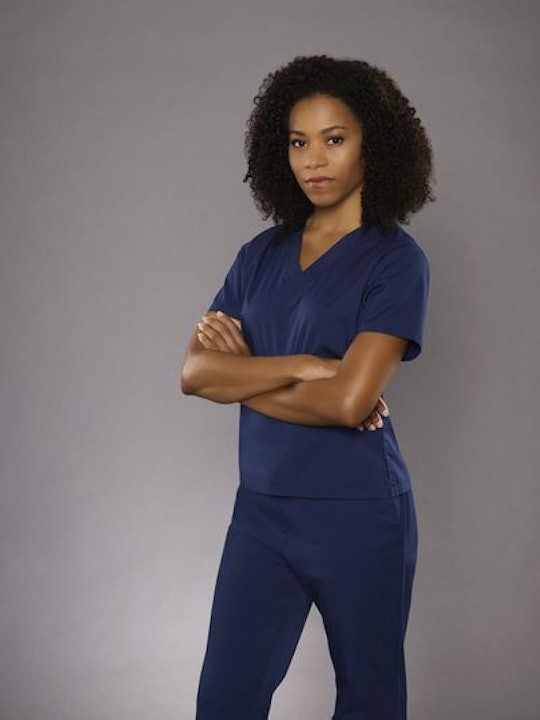 As promised, in this week's episode of Grey's Anatomy, Maggie finally found out about her sister Meredith's relationship with her semi-crush Riggs. Now that she knows the truth, will Maggie forgive Meredith on Grey's Anatomy? Though Maggie spent most of the episode giving her big sister the cold shoulder, it looks like Maggie is at least ready to consider moving past it.

Though Meredith had worked through a whole speech of how she was going to tell Maggie about her relationship with Riggs, she ended up not really needing it. Maggie, unfortunately, discovered the truth during Meredith and Riggs' press conference about their amazing hero work on the plane incident from last week. During the conference, Riggs said how Meredith deserved to get all the praise and put his hand on Meredith's shoulder in a way that made it very clear to Maggie that Meredith and Riggs were more than just colleagues.

After that, Maggie was angry and declined to answer Meredith's calls. Once she did talk to her, she only wanted to know if Meredith had joined the mile high club. Tensions between them only got worse when Maggie stole an OR Meredith planned to use for a surgery, which was probably the most petty things fans have ever seen Maggie do.

At that point, Meredith had enough and took her sister into the supply room, where a number of serious Grey's discussions (and hook-ups) have previously taken place. It was there that Meredith finally confessed she and Riggs actually hooked up a long time ago, before she even knew Maggie liked him. Of course, that only made the situation worse to Maggie, whose mother had just lied to her about how dire her health was before dying.

Maggie felt betrayed by how long Meredith lied about her relationship with Riggs and that she let Maggie go on and on about her feelings for him and never said anything. To be fair, Maggie kind of has a point, but as fans know, it was a hard decision for Meredith, and she also honestly didn't know if she really wanted to be with Riggs in the first place.

In the end, Meredith refused to give up on her relationship with her sister. Instead, she convinced Maggie to go out for a girl's night with her and Amelia. Even though Maggie did so reluctantly and even said she still wasn't done being upset with Meredith, the fact that she agreed to go makes it clear that they'll be able to make amends. As the saying goes — sisters before misters, right?