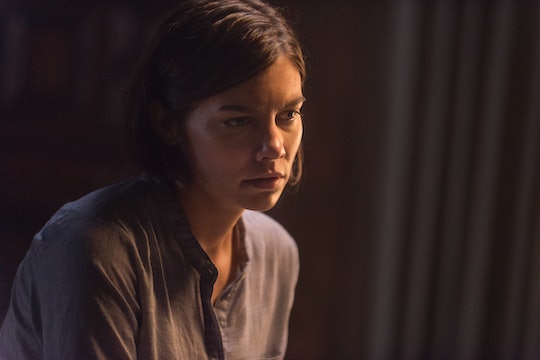 One of the most confusing things about The Walking Dead is remembering what kind of timeline we're working with throughout the span of multiple seasons. It moves at a walker's pace, really. For example, it's been two years since Maggie announced that she was pregnant and yet she doesn't even appear to be showing. So when is she having this baby? Will Maggie give birth in The Walking Dead Season 8? Let's just say, I wouldn't get my hopes up if I were you.

Just in case you're totally confused, Maggie revealed that she was pregnant back in the first half of Season 6. But the timeline of Season 7 was only a total of 19 days and Season 8 picked up just a little while after that. So, she's really only two months along, which is why she's not showing. And Season 8 seems to be moving just as slowly, so don't expect some frenzied birth scene by the time the finale rolls around. It's only been a couple of weeks since Negan showed up and killed Glenn, believe it or not.

Showrunner Scott M. Gimple told Entertainment Weekly that fans shouldn't expect to see her pregnancy develop too much. "It's quite early in, as it was in the book," he explained. Lauren Cohen, who plays Maggie, admitted that she feels bad for fans waiting for her and Glenn's child to come along. "I always want to put a little ticker tape along the bottom of the episode saying how far into the apocalypse and into the pregnancy we are," she said in the same cast and crew interview. Still, fans are losing it trying to figure out how far along she is, especially compared to Judith, who showed up looking like she had really grown up a lot.

But it's not like the showrunners and writers are ignoring the pregnancy at all. If anything, The Walking Dead creative team is on point with all the little details. The timeline is just that excruciatingly slow. Even the cast has trouble "keeping up" with the slow pace. Josh McDermitt, who plays Eugene, told ComicBook.com:

It is hard. I have to constantly remind myself to check in with Greg [Nicotero] or Scott [Gimple]. Like 'How long has this been?' because even that episode where Negan came back to Alexandria — he showed up early. I mean, that was maybe four days, five days. He said 'I'll be back in a week,' and he shows up early.

It can be frustrating and mind-blowing when you realize just how much time has actually not passed in The Walking Dead universe.

It wasn't just Judith's height and lack of a baby bump that had fans scratching their heads, wondering if the gestation of a baby in the wake of a zombie apocalypse was somehow different. Earlier this season, Maggie was spotted watching Gracie, who was taken from a Savior outpost in Season 8. Since Aaron brought the baby to Hilltop, Maggie was put on babysitting watch. But it was confusing to see her with a baby since everyone is anxiously waiting for her to just give birth already. So no, this child wasn't hers and her baby won't be arriving anytime soon.

Hopefully, the showrunners don't veer too far from the comics with Maggie's pregnancy just to keep fans watching. In the comics, Maggie ends up running Hilltop with her baby, who she names Hershel after her dad. (I'm not crying, you're crying.) Since she's essentially Gracie's caretaker right now, maybe she'll "adopt" her and make her own little family with both kids.

But at this rate, we might never get to see that touching moment or what happens to Maggie, her baby, and Gracie until at least Season 9 or beyond. You know what, maybe a ticker that gives us the timeline isn't a bad idea, because it's going to be a while, obviously.