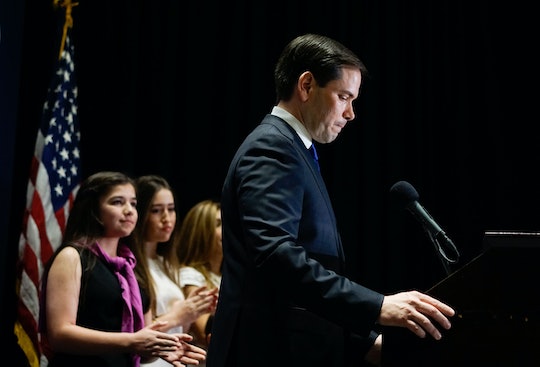 Will Marco Rubio Be Chosen As A Running Mate In 2016? It's Not Impossible

After losing all 99 Florida delegates to Donald Trump in Tuesday's winner-take-all primary election, Marco Rubio suspended his 2016 presidential campaign. Rubio only picked up six delegates (from North Carolina) this week, bringing his total to 169, as opposed to Trump's nearly insurmountable 673. Now that he's finally accepted that he won't be president, might he have his sights set on vice president? Will anyone choose Marco Rubio as a running mate in 2016?

Way back in November 2015, when we were all young and innocent, The New York Times asked its readers to predict the 2016 presidential election ballot, and most of the respondents thought that Rubio was a shoo-in for the Republican nomination, although more than one predicted Trump would win and offer Rubio the VP role in order to court the Hispanic and youth votes. I seem to recall the animosity between Trump and Rubio beginning long before November, but maybe these people don't report on Twitter feuds for a living like I do, so I'll give them a pass.

Rubio did graciously congratulate Trump on his win on Tuesday night — could that be a sign that he's hoping to be Trump's running mate? LOL, no. Or, in the more professional tone of Boston's WBUR, "[H]ow could Rubio credibly, and in good conscience, argue for Trump’s proposal to deport 11 million people?" The show also pointed out that Trump has previously referred to Rubio as both a "clown" and a "baby," which isn't something I look for in a boss.

The conservative blog RedState.com makes the case for a Cruz-Rubio ticket, pointing out that Rubio's out of a job in January, since he hasn't chosen to run for Senate again. They argue that becoming Cruz's running mate would keep Rubio in the spotlight, and give him the opportunity to network with Cruz's donors and campaign strategists, which would be a boon to any future campaigns Rubio chooses to undertake. Cruz would most likely benefit from those 169 delegates of Rubio's, too, although he'd still have about a hundred less than Trump.

To be fair, I'll even pretend that Gov. John "Wait, Seriously, He Still Hasn't Dropped Out?" Kasich has a shot at the presidency, and explore the possibility of Rubio being his running mate. Rubio clearly bears no ill will towards Kasich; he actually urged his Ohio supporters to vote for Kasich in their primary in order to defeat Trump. However, Kasich's spokesman, Rob Nichols, responded to that by telling a reporter that "We were going to win in Ohio without his help, just as he's going to lose in Florida without ours."

So that's a no for Trump, a no for Kasich, and a shrug for Cruz. It's not impossible, and it would keep Rubio busy for a few months. Of course, Rubio technically only suspended his campaign in the Republican Party, there's always the possibility that he could run under a third party as a conservative end-run around Trump, but we've all seen the numbers, so don't hold your breath.