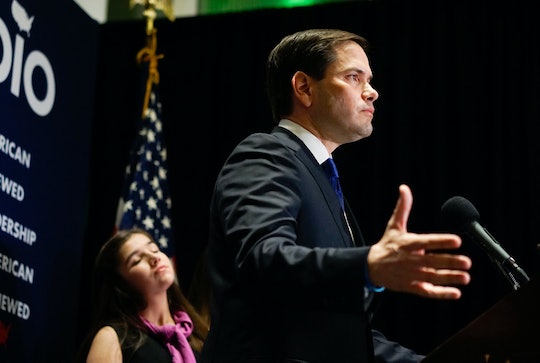 Will Marco Rubio Run for President In 2020? He Has All The Right Tools

As pretty much everyone in America knows by now, Florida senator and one time GOP presidential hopeful Marco Rubio has ended his bid for the White House. After a long, uphill battle against the juggernaut that is Donald Trump, Rubio has finally decided to throw in the towel. It's over. Or is it? While his 2016 campaign to become President has reached it's disappointing end, there are definite signs that the junior senator may not actually be down for the count. With that in mind, will Marco Rubio run for president in 2020?

Rubio himself doesn't seem to think that his shot is over, if his fairly ominous statement to Eli Stokols of Politico are any indication. “There will be a reckoning in the mainstream media, where all these networks and cable networks are going to have to ask themselves why did they give so much coverage for the sake of ratings,” Rubio told the outlet. “There will be a reckoning in the conservative movement, where a lot of people who for a long time have espoused conservative principles seem to not care about those anymore in rallying around Donald Trump because they like his attitude. I think there are a lot of people in the conservative movement who are going to spend years and years explaining to people how they fell into this and how they allowed this to happen.”

Those are some strong words. So will Rubio actually give the presidency another shot in four years or will he sit back and let the GOP roll forward without him? So far, he hasn't officially committed to anything, but to be fair, the guy just ended what was meant to be a spectacularly successful Presidential campaign last night. He may need a moment to regroup.

Rubio still has a few strong points on his side. He is only 44 years old, young by political standards, so another run in 2020 is perfectly plausible. In fact, before Trump entered the scene, the biggest rising star in the GOP was Rubio. Considered a fresh new face for the Republican Party, there was a time in the not-too-distant past when Rubio ticked all of the boxes. He was hugely popular in his home state of Florida (before his pretty embarrassing loss in Florida on Tuesday). He had a great rags-to-riches story as a first generation American born in Miami to Cuban immigrants.

Rubio largely appealed to average, everyday Republicans and the party elite alike. As Tom Geoghegan of the BBC noted, "If Republican strategists were to assemble their ideal presidential candidate in a factory, a product resembling Rubio would come rolling off the conveyor belts."

While Rubio has suffered at each primary and caucus (and let's do the guy a favor and just not talk about his dismal debate turnouts), he still seems to have the support of many. If he regroups in the next four years, could he become president in 2020?

That may seem incredibly far off in the distance, particularly when we still have many months of campaigning ahead of us. For now, I hope Rubio takes a minute to recharge with his family, reevaluate his campaign strategy, and have a nice, big glass of water.