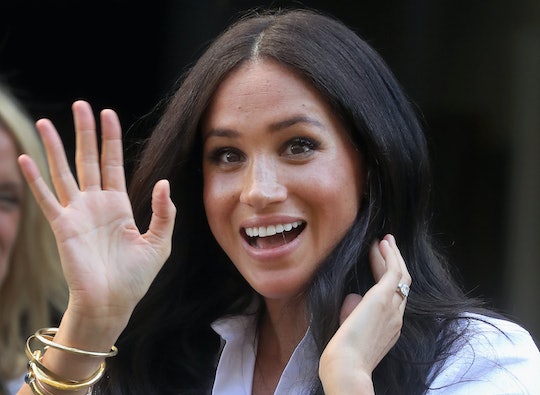 Things were a little less complicated for Meghan Markle back in 2014, weren't they? She was an actress living in Toronto, working on her popular show Suits, presumably hanging out with her BFF Jessica Mulroney and going to hot yoga on her days off. She was also busy cultivating her lifestyle website The Tig. But that was before the big change happened, before she married Prince Harry and became the Duchess of Sussex. In 2017, she shut down her website, but was that really the end? There's been some hope that Meghan Markle might blog again after a recent transaction, but don't get too excited about a revival of The Tig.

For those of you who might have missed The Tig during its heyday, it was a site dedicated to profiling influential women and discussing gender inequality as well as diving into topics like fitness, nutrition, fashion, and food. In other words, The Tig was a window into Markle's own soul, with personal anecdotes from her life and snippets of her own brand of philosophical wisdom.

Now that Markle is in the media more frequently under a different spotlight, but also retreating into her own private world with husband Prince Harry and baby boy Archie, fans would probably love a better glimpse at the world through her eyes. So when her business manager Andrew Meyer filed to renew The Tig's trademark recently, according to Glamour, there was a renewed sense of hope that The Tig might live again. Meyer also trademarked Tigtots, according to ELLE, which had some wondering if a parenting spin-off could be in the works.

Unfortunately, a revival or a launch of a new parenting is simply not going to happen. In fact, a Buckingham Palace spokesperson told People that Markle has "absolutely no plans to relaunch The Tig," further explaining that she had applied to hold the trademark in an effort to "prevent false branding, to avoid others purporting to be the Duchess or affiliated with her."

To be fair, relaunching The Tig did not seem outside the realm of possibility considering some of Markle's most recent ventures as a member of the royal family. In September, for instane, she was the guest editor of British Vogue (while actually still on maternity leave with baby Archie, who was born on May 6, if you can believe it) dedicating the issue to women who have become "Forces for Change," according to Vogue.

Additionally, Markle also designed and recently launched a capsule collection of work-appropriate fashion in conjunction with one of her royal patron charities, Smart Works, in an effort to provide business clothing for women trying to get back into the work force, according to Vanity Fair.

In other words, Markle's ideals have not changed at all since her time with The Tig. It seems the only thing that has changed is her platform. She is still focused on being a true force for change herself, on highlighting the works of inspirational women and helping them to make their own world a better place.

Meghan Markle's whole life is The Tig now. So, I guess, she doesn't need to blog about it anymore, she's living it.