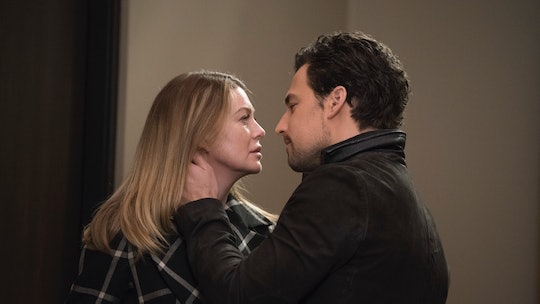 Meredith & DeLuca May Take The Next Step On 'Grey's Anatomy'

At the end of Grey's Anatomy Season 15, Meredith (Ellen Pompeo) confessed her love to DeLuca (Giacomo Gianniotti), though it was a situation made more complicated by her impending legal troubles. When Season 16 premieres on ABC on Sept. 26, they might have decided to take their relationship to the next level. In fact, some fans are wondering if Meredith and DeLuca will get engaged on Grey's Anatomy.

One fan on Twitter could have the answer. They spotted a silver band on Meredith's ring finger in a promotional poster, which naturally made them wonder if she was engaged or married to DeLuca. That would be a pretty big spoiler to reveal via promo, but also a small enough detail that it could go by unnoticed by most. It's possible a ring is just a ring, but there's also a chance Meredith and DeLuca are planning to tie the knot.

But this is all speculation. There hasn't been any confirmation that the two characters are engaged. Fans will have to wait for the first episode of Season 16 to find out for sure what's going on with Meredith and DeLuca. It looks like they'll be starting off the new season happily in love, but that doesn't necessarily mean marriage is on the horizon.

Executive producer Krista Vernoff spoke to Entertainment Weekly about the status of Meredith and DeLuca's relationship. "Life comes with a lot of 'happy endings' that are followed by real-life complexities," Vernoff said. "Meredith was fired and we left DeLuca in jail. The 'I love you' is a beautiful silver lining on a complicated chapter in Meredith's life." Though it was a positive step for the characters to take, the circumstances may result in some bumps along the way.

Vernoff was coy when it came to the topic of marriage. When asked about the possibility of Meredith and DeLuca getting engaged, she only said, "You never know." That isn't an outright denial, so it still leaves the door open for a wedding down the line. But it's important to remember that it's not a ringing endorsement, either. It's a perfectly ambiguous statement that doesn't really support speculation one way or another.

Meredith and DeLuca could always decide to get engaged later on, but it seems a little soon for that at the moment. Meredith only just told him she loved him, so jumping to marriage right away would be too much of a whirlwind. They still have to navigate that whole insurance fraud situation first, as well as the fact that Meredith is technically unemployed at the moment. If they get all of that settled, then they still have to negotiate the new stage in their relationship post-"I love you."

Meredith and DeLuca might be endgame when all is said and done, but it seems unlikely that they'll be getting their happy ending any time soon. They have a lot of other things to deal with first, but perhaps when the dust clears, they'll have marriage on their minds.