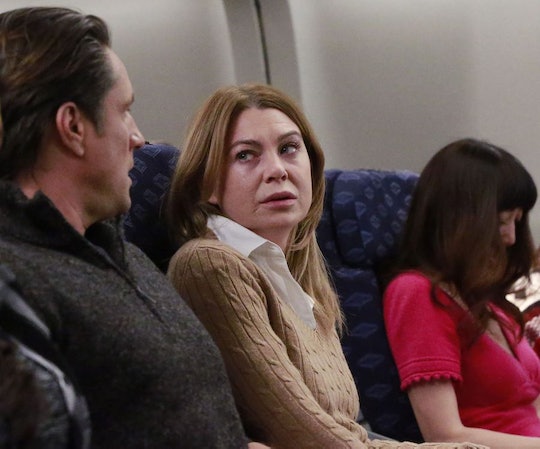 A bomb, drowning, a shooting, a plane crash. These are just a few things Meredith Grey has survived in the past 13 seasons of Grey's Anatomy. Hasn't she been through enough? Apparently not. It appears in the newest episode that Meredith may find herself in yet another plane crash and fans are wondering — could Meredith die on Grey's Anatomy? Thankfully that seems highly unlikely.

Even though the plane crash happened way back in Season 8, it's still a sore spot for any Grey's fans, which begs the question, why is Shonda Rhimes putting us through this all over again? We've already been down this terrifying road before. That being said, I feel confident that she has no intention of killing off her titular character, especially when she could've done so back in Season 8. Why let Meredith survive the plane crash back then only to kill her off in a plane crash now? It doesn't make sense.

Most likely, this episode will be more about the plane scare causing Meredith to experience PTSD. Fans never really saw what happened on the plane back in Season 8. All they saw was mostly the aftermath of when it crashed. In this episode, fans will follow along as Meredith has to deal with her fear and anxiety as her plane experiences turbulence and goes through a bad storm. Adding to the drama, she'll have to go through it with her almost-boyfriend Riggs, who she cancelled a date with at the end of the last episode.

Rather than dying in the new episode, Meredith may be given the push she needs to finally give a relationship with Riggs a shot. After she survives this terrible flight, she will be reminded that life is short and she should live it to the fullest. Based on that realization, she may decide to finally go on a real date with Riggs before it's too late. She'll still have to figure out how to tell Maggie, but that could be a problem for another day.

Besides, even if Maggie is a little mad about Riggs and Meredith being together, after having to deal with the loss of her mom, whatever feelings she had for Riggs have probably dissipated and it doesn't even seem like he's on her radar anymore. She may have even moved on to someone else. (Some people are already 'shipping her and Jackson.)

In either case, Meredith will most likely be alive and well by the end of the episode. Seriously, can there even really be a Grey's Anatomy without Meredith Grey? I think not.