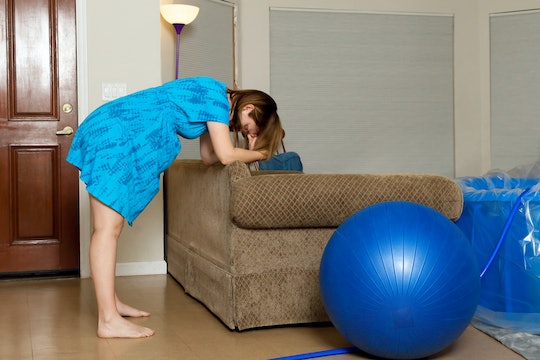 Feeling the baby flutter and move in my belly is one of the most miraculous things that has ever happened to me since becoming pregnant for the first time. It showed me that sh*t has officially gotten real, and there’s an actual human inside of me. Kinda weird. I know I’ll probably become more annoyed with them the more constant (and painful) the kicks become, but hopefully I can rest assured knowing that I’ll have my body back after the baby is born. But what about during the labor process? Will my baby be active during labor, too? Will I feel him moving along with those contraction pains?

According to Dr. Sherry Ross, an OB-GYN and women’s health expert at Providence Saint John’s Health Center in Santa Monica, California, and author of She-ology: The Definitive Guide to Women's Intimate Health. Period., you will continue to feel your baby being active during labor, but it may be less noticeable since you’re not eating or drinking and the baby isn’t being stimulated as much by the usual nutrients. “Plus, you are contracting every two to three minutes, so you are more aware of what is happening with your uterus and body as opposed to the movement of the baby,” Ross explains to Romper. “The baby’s heart rate is being continuously monitored during labor, so you know everything is fine unless the nurse or obstetrician tells you otherwise. Focusing on the movement of the baby during labor is less of a priority.”

After doing some research on this topic, I found there are a lot of worried moms on message boards who are concerned that their babies were seemingly less active the closer they were to their due date. Thankfully, Ross says this is very common. “As the baby grows and gets larger, the perception of movement will change and might be less noticeable as you get closer to your due date. If there is persistent decreased fetal movement, an ultrasound to check the fluid around the baby and non-stress test (NST) should be performed. A lower amount of fluid around the baby is a concern that can lead to fetal distress and death,” she says. Patricia Evans, a nurse practitioner and certified nurse midwife at MemorialCare Medical Group in Fountain Valley, California, agrees and adds that as your baby gets bigger, there’s less room for them to move in your uterus — they’re running out of space, and the movements are more rolling and stretching. “However, you should still feel 10 movements in two hours. The baby feels the labor coming sooner than you do and are quieter,” she tells Romper.

An active baby is an indicator of how healthy your baby is and generally, you should start feeling some sort of “fetal movements” between 18 and 28 weeks, but if this isn’t your first pregnancy, it could happen as early as 15 or 16 weeks. These movements should increase over time and get stronger, and last all the way up to your due date.

“Early fetal movement is felt most commonly when the woman is sitting or lying quietly and concentrating on her body. She may also feel fetal movement after eating or drinking a sugary beverage,” Ross says. Starting at 28 weeks, you’ll even be asked by your healthcare provider to start monitoring fetal kick counts (FKC), “making sure you’re aware of the number of times your baby kicks, jabs, rolls, etc., over two hours,” according to Evans. And this number should be 10. “Oftentimes movements go unnoticed. There are apps to remind you and track movements. After a meal is a good time to count. If you feel the baby isn’t moving, or is decreased, call your provider right away,” she says. “Fetal movement is noticed most often late at night between 9 p.m. and 1 a.m. If you notice there is less or decreased fetal movement during the day, you should drink a large glass of juice and lay on your left side to see if your baby will move with a sugar boost and blast of hydration,” Ross adds.

Once you’ve hit the 18 to 21-week mark in your pregnancy, you’ll probably be feeling those baby movements in some form all the way up to, and during, your labor — though they won’t be as strong and pronounced during labor, since there’s kinda a lot of other stuff going on in there. Monitor your baby’s movement up until the birth of your baby by using the kick count method and be sure to alert your doctor if there’s anything that concerns you.

More Like This
How To Increase Your Sex Drive While Pregnant
Are You Leaking Amniotic Fluid Or Is It Normal Discharge? Experts Explain
What Does Amniotic Fluid Smell Like? A Nurse Explains
Here's How To Keep Your C-Section Incision Dry