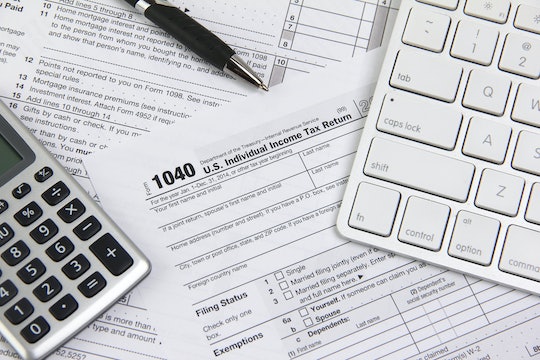 The GOP passed a new tax plan earlier in December, and President Donald Trump signed the proposed plan into law just before Christmas. The plan, called the Tax Cuts and Jobs Act, is a massive tax reform bill that will most certainly affect every tax paying American in the country. As economists and other experts set about the work of trying to unravel the details of the complicated tax plan, regular Americans have immediate questions. Like whether or not your taxes will be lower, or if you're in for an unfortunate surprise when many of the provisions from the new tax plan are set to take effect on Jan. 1, 2018.

The tax plan, which Trump officially signed on Dec. 22 before heading to his Florida estate, Mar-a-Lago, to celebrate the holidays, is one of the most major tax overhauls in the past 30 years, according to CNN. And President Trump told reporters that this was a good thing. As CNN reported, Trump was lauding the tax measure as something that would work for everyone, especially the middle class. According to the outlet, the POTUS said:

Whether or not middle class Americans will truly benefit from the new plan, one aspect of the new tax plan appears to be certain: some taxpayers look to be paying fewer taxes in the new year. While there was discussion of breaking down the tax brackets into four groups rather than the current seven, the Senate chose to stick with seven distinct tax brackets.

Here is a run down of each tax bracket, according to The Tax Foundation, and how the new tax bill will affect your taxes next year. It should be noted that some of the tax brackets have been adjusted; for example, the new tax bracket of individual tax payers who make between $200,001 to $500,000 has been changed from the current bracket of $424,950 to $426,700.

Under the current law, single filers in this tax bracket pay 10 percent of their income to taxes, and the new tax bill won't change that. For people filing jointly, like married couples, the income range of $0 to $19,050 would also continue to pay the same amount in taxes, 12 percent.

This group will actually pay less in taxes; rather than paying 15 percent, they will now pay just 12 percent. The same 12 percent in this bracket applies to people who file jointly (with an income range of $19,051 to $77,400).

Taxpayers who are filing in this income bracket (with married filers making between $77,400 to $165,000), will actually pay less in tax. Under the current system, you would be paying 25 percent of your earnings towards taxes; with the GOP's new tax plan, you will be paying 22 percent.

While it's exciting to consider some tax cuts in the new year, it's also important to remember that these cuts (along with higher child tax credits) are temporary. CNN reports that individual tax cuts are set to expire in 2025, which could mean the end of the tax breaks the GOP plans to implement this year. The GOP made these cuts temporary as a way to push their plan through without any Democratic votes, the outlet reported.

So it looks as though time will tell how these tax cuts might actually pan out in reality.