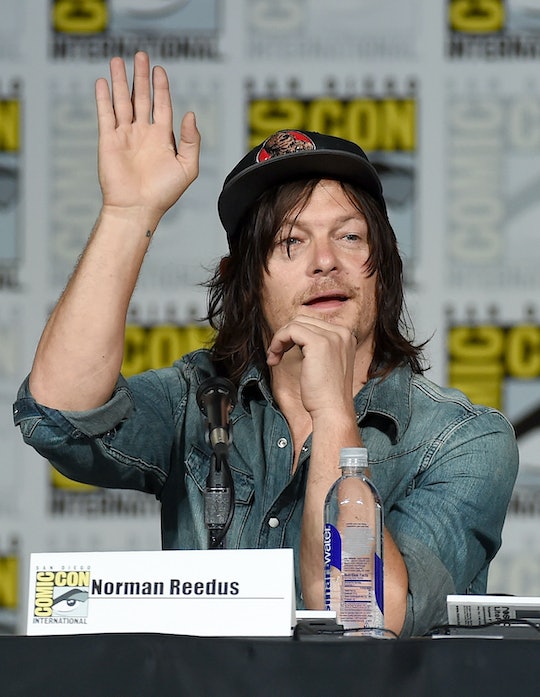 Will Norman Reedus Return To 'The Walking Dead' Season 7? He's Dropped Some Hints

Norman Reedus' Daryl Dixon is almost synonymous with The Walking Dead, perhaps just as much as Andrew Lincoln's Rick Grimes. His face is plastered all over merchandise, posters, you name it. Daryl is not a character who exists in the comics, so the intense interest fans took in him was really thanks almost entirely to Reedus; the writers even wrote the character specifically for him in the first place. Since there's no comic history to go on with him, Daryl has proved something of a wild card, with his potential death even more impossible to predict than the usual The Walking Dead deaths. In the show's sixth season, audiences are especially on tenterhooks since everyone knows a big character is going to meet their maker thanks to new villain Negan. Will Daryl finally be the one to reach a sticky end? Will Norman Reedus be returning to The Walking Dead Season 7?

While there are no official confirmations as to who is or isn't returning (gotta keep those spoilers from being spoiled!), there are some hints to go on. Reedus is set to appear on The Talking Dead following the season finale, which some people consider a confirmation that a character is going to die. Many actors have made a final goodbye on the talkshow after their character's death. Then again, Reedus himself has hinted at his continued presence on the show.

In an interview with ColliderVideos, Reedus discusses fans encounters, his upcoming movie Triple 9, and The Walking Dead. While he never explicitly confirms his return for the seventh season, when asked about future projects for the year, he mentions his various movies, books, art shows, and his reality show before saying that he'll "then go back to The Walking Dead." It seems pretty casual for a guy who might be trolling, but then again he is an actor.

In interviews about the finale, Reedus is similarly unreadable. Much has been made of the extreme reactions of his castmates, and while Reedus definitely confirms to Entertainment Weekly that it'll be a big, amazing, stressful episode, he also doesn't necessarily make it sound like Daryl might be gone. He told Entertainment Weekly, "And it’s the most hardcore episode we’ve ever shot. I couldn’t speak after I watched it. And, of course, I knew what was happening, and what was going to happen, and who was involved, but I got to tell you, I couldn’t speak for like an hour. And then I just was bombarded with phone calls on my drive home. [...] I will say that it might be the best episode we’ve ever shot of the show."

All of that "what was happening" and "who was involved" sounds a lot to me like whatever rough stuff was going down was happening to another character. There will be no way to know until Sunday night's finale, of course, but whether Reedus returns or not, the sixth season finale definitely seems like it'll be an episode to remember.