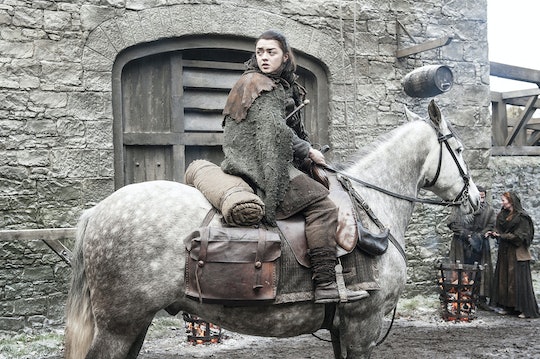 Nymeria's Fate Could Be Grim On 'Game Of Thrones'

In the preview for Season 7 Episode 2 of Game of Thrones, one of the most notable scenes involves Arya and what looks to be a direwolf who seems to want to have her for a fourth meal. (This animal knows how to give an intimidating growl, folks.) But many believe this wolf to be Nymeria, which could be setting up another awesome reunion, this time between Arya and her pup. However, since happiness never lasts very long on this show, so may start to worry: will Nymeria die on Game of Thrones?

Arya’s direwolf was always loyal to her, going as far as biting the young Prince Joffrey in order to protect her. But since it’s been so long since the two have been together (Arya set her free into the woods to save her from the Lannister army), Nymeria might not even remember Arya. And if Arya has to kill her direwolf in order to protect herself, she might have no choice. (Though that would be incredibly depressing, even by GoT standards.)

The other explanation, which might better suit fans — who would love nothing more than to see Nymeria leap into Arya’s open arms and watch them roll around together on the snow-covered ground — is the possibility that the wolf in the trailer is not Nymeria at all. And it’s a much better alternative than another possible direwolf death.

In the books, Nymeria goes on to lead her own super pack of direwolves, so there's a chance that the wolf in the Game of Thrones promo might simply be part of that pack. And when it growls at Arya, Nymeria could be close by, ready to force it to back down, thereby giving viewers the Arya/Nymeria reunion and keeping them both safe... at least for now.

That still doesn’t tell us if Nymeria will die on Game of Thrones or if she’ll live another day to bite another royal. They wouldn’t bring her back just to kill her for good, right? Although to be fair, Season 6 did finally give us a more grown up and floppy-haired Rickon, who was shot through the heart with an arrow before he could reach Jon. So the Game of Thrones writers can do pretty much whatever they want at this point.

But since Arya’s goal is to travel alone on her way to King’s Landing, having the companionship and backup of Nymeria and a wolf pack could be where things are headed with this. Arya got lucky by meeting a much more subdued version of Lannister soldiers in the woods, but during Season 3, she met a band of older, more hardened, soldiers who didn’t offer her a seat in their drum circle or anything to eat.

If she were to come upon similar soldiers now while alone, it might not be so good — even with her new badass fighting skills. So maybe Nymeria would die from protecting her. It would still be a heartbreaking fate, but at least it would serve a greater purpose.