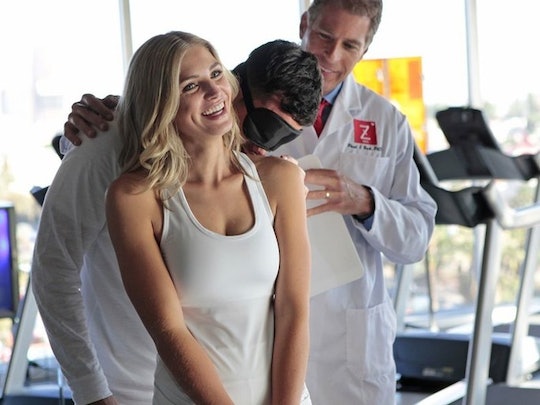 Will Olivia Be The Next 'Bachelorette?' Fans Have Strong Opinions About Her

It's fun to watch The Bachelor to see who will ultimately win over the leading man, but also because ABC uses the pool of contestants to cast its sister show, The Bachelorette. One of the women Ben passes on will head up the next season, which airs in late spring, and have a chance to find her Prince Charming. Usually it's someone viewers love throughout the season or someone who splits the crowd to keep things interesting. At this point news anchor Olivia Caridi probably falls in the latter category, so, could Olivia be the next 'Bachelorette'? It's possible, because fans definitely have mixed — and very strong — feelings about her.

Early on in the season, it looked like Olivia might have stolen Ben Higgins' heart from night one. They had chemistry, she was one of the first ones to smooch a Bachelor that many on Twitter called an awkward kisser, and she was pretty strategic in her moves to get some alone time with him. But, recently, things have taken a turn for Olivia, and although she hasn't been sent home yet, it doesn't look like she'll make it to the end. After appearing to corner Ben to talk about her cankles the night he was mourning the painful loss of his two friends, then having a couple of breakdowns, and reportedly offending other contestants, it doesn't seem like Olivia is the one Ben will eventually choose to live happily ever after with. She probably won't be happy about that in the moment. But the fact that she's likely to be sent home — just not quite yet — is exactly why she could be the next Bachelorette.

Interestingly, there are already rumors circulating that Amanda Stanton is going to be the next Bachelorette. Last season, the Bachelorette producers had a hard time choosing between fan favorites Kaitlyn Bristowe and Britt Nilsson and ended up casting both of them. And it was sort of awesome. If Amanda and Olivia already have a little drama between them, can you imagine the insanity that could ensue this summer at the mansion? That's a nice idea for ratings and everything, but Amanda, by herself, would make a great Bachelorette. Fans adore her.

It also works in Amanda's favor that she's a divorced mother of two daughters. The Bachelorette has already starred a single mom once, but Emily Maynard was widowed, which would make Amanda a slightly more progressive choice. And hey, it wouldn't hurt for the network to drive home that single parents date, too.

Still, there's Olivia. The big question seems to be whether she'll last long enough to retain viewers' interest without completely repelling them. She's always onscreen, but at the end of episode 4, it seemed like Ben might not even give her a rose, and there are signs that viewers are starting to hate-watch her more than cheer for her:

Then again, there are some die-hard Olivia fans out there:

At this point, it could go either way.