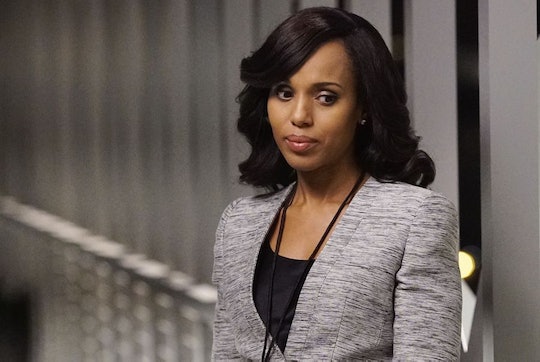 Will Olivia & Jake Get Back Together On 'Scandal'? Their Relationship Never Ends

This season alone of Scandal has given us whiplash when it comes to Olivia and Jake. In the mid-season premiere, they were back on once again. Rapidly, however, they fell apart again — so much so that Jake is now engaged to another woman, Vanessa Moss. That hasn't stopped Olivia from obsessing over Jake and spying on him. Jake, however, also kept going back to Olivia. In the recent episode, Jake went so far as to break into her apartment. Thursday's episode saw new developments for them, as well. So, are Olivia and Jake going to get back together on Scandal (yet again)? Or, can we officially call this relationship off?

Previously, Olivia resorted to putting cameras in Jake's apartment and spying on him and his fiancé, Vanessa. Once the NSA got involved, however, that pretty much had to stop. Not only is she still hung up on Jake romantically, but she also admitted to the Gladiators that she thinks he's up to something bigger. On Thursday's episode, "Pencils Down," this obsession continued. Similarly to how Jake cornered her in the last episode, Olivia got Jake alone. During an intense make-out session, she whispered in Jake's ear, "Whatever this game is, I will win."

Not only that, but during the episode, Quinn showed Olivia security pictures of Jake. When Olivia said that was not enough information on him, Quinn posed as Vanessa's former college peer in order to get dirt on her and Jake.

It's clear that both of them are so drawn to each other that they exhibit shifty behaviors to get to each other. While they are not officially back together, something is clearly going on. Olivia seems to have both romantic and professional interests in Jake — she cannot stop seeing him, but she also cannot stop spying on him.

Jake showed similar behavior: he cannot stay away from Olivia despite being engaged. His relationship with Vanessa does seem strange, however. It happened pretty suddenly, and they even met in an almost identical way that Jake met Olivia: he bumped into both women randomly, he disappeared, and then reappeared days later. Olivia is not wrong to think that something is up with him, but she cannot keep her personal feelings out of it.

As for now, Olivia and Jake are "off" in that they are not officially in a relationship. Despite Vanessa, however, they continue to see each other. Is Jake's engagement to Vanessa real, or is Jake just OK with cheating on her? Even without considering his relationships, Jake is always doing some shady things that Olivia needs to watch out for, so I hope Olivia keeps him at arms length.