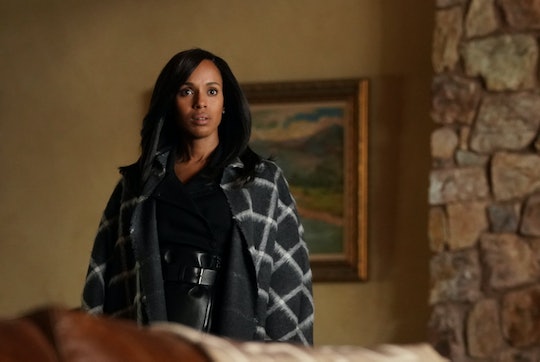 Quinn & Olivia Are About To Come To Blows On 'Scandal'

All of the secrets, backstabbing, and cover-ups have all come down to what is bound to be a memorable reunion between Olivia and Quinn. But since it's still unclear as to what will ultimately happen once they see each other again, will Quinn kill Olivia on Scandal when it all comes down to it? In the promo for the next episode "Army of One," it looks like Quinn finally reveals herself to Olivia, no doubt shocking the B613 powerhouse in the process. Oh, and did I mention that she has a gun and may not be afraid to use it on Olivia if need be.

While Scandal started out as the Olivia Pope show, it's definitely morphed into something that covers almost all of the supporting characters equally. Even so, I don't know if I can see the series ending with Olivia actually dead, despite all she's done without her white hat for the past couple of seasons. But to put into perspective the motive behind Quinn's possible desire to kill her former friend and boss, let's look back on all of the recent deeds Olivia's done to get on Quinn's bad side.

First, she knowingly ordered a hit on the president of Bashran, which inadvertently included the death of his niece, whom Quinn had helped and encouraged to go back home. Then, Olivia failed to heed Rowan's warning about killing Quinn and when he believed Quinn and her unborn baby to be dead, she simply went on with her life. I'd say Quinn definitely has every right to want to kill Olivia at this point, but I'm not sure if that's the kind of resolution this storyline will get.

Earlier in Thursday's episode of Scandal, Charlie told Quinn that he was basically ready to go out and kill Olivia if she wanted him to, but she made it clear than instead of killing her, she wanted to bring her to justice the right way. That being the case, I don't see Quinn actually killing Olivia during their showdown in the next episode, but rather using the gun for her own protection and to hopefully coerce Olivia into turning herself in.

But, as someone pointed out on Twitter, would Rowan really let it get to that point anyway? While it's true that he's not exactly fond of his daughter at the moment, she is his child after all. And during Thursday's episode, as he was holding Quinn's baby, he said something to the tune of "the things we do for our children." So even if Quinn wants to kill Olivia on Scandal this season, I don't see Rowan allowing that to happen.

All this time, Rowan had been adamant about keeping Quinn and the baby at his house in order to keep them safe, but he may have also been keeping them under his thumb to keep his own child safe. Olivia might deserve anything that Quinn would dish out to her, but at the end of the day, she's still Rowan's daughter.

Quinn's immediate reaction to Charlie wanting to kill Olivia kind of says it all, though. If her goal is to put Olivia in prison, then their showdown won't likely end in gunfire when it comes. Even Katie Lowes (Quinn) doesn't see the former friends reconciling in the future. She told TheWrap that despite anything Olivia might do to redeem herself, if at all, quinn forgiving her "just might not be possible."

Just because Olivia is probably going to make it to the end of the season, it doesn't mean that the showdown coming between her and Quinn isn't going to be all kinds of epic. The walls have been closing in on Olivia and with Quinn finally able to reveal herself as alive and well, it will be interesting to see Olivia's reaction to the big reveal. And even if Quinn doesn't kill her, she definitely deserves to tell Olivia like it is because Olivia's gone down the darkest path we've ever seen for her. Hopefully there will be a way to bring her back before the series is over for good.