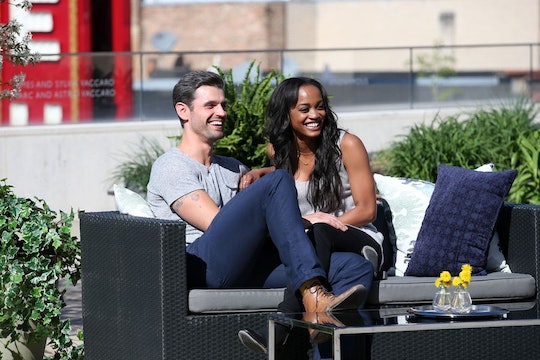 Peter & Rachel Hit A Standstill On 'The Bachelorette'

Until Monday night and the fantasy suite dates, Peter was pretty much a sure thing, but now that there's been all this talk about the future and marriage, will Rachel eliminate Peter on The Bachelorette? His fantasy suite date might not even happen because of his reservations about proposing. But even before their evening date, he admitted to Rachel that he's falling in love with her and his meeting with her family seemed to go the best and most smoothly.

But his hesitations when it comes to an engagement and marriage in general are what have worried Rachel thus far. And if we want to get really real for a second, that's a fair concern Peter has since their relationship was a whirlwind thing that has only spanned all of six weeks up until this point. Since marriage is the whole point and the endgame in all of this though, naturally Rachel worried that Peter might not be all in where that's concerned.

In fact, Peter didn't even ask Rachel's mom for permission to propose to her. In a way, that's a red flag since Peter is kind of supposed to propose if he's the last man standing at the end of The Bachelorette this season. But he's also just trying to be realistic and on a show where men are claiming to love the bachelorette after like two weeks, that's a welcome perspective.

Rachel got pretty real with Peter for a minute near the end of Monday's episode and told him that she didn't put her life and career on hold to go on The Bachelorette without expecting an engagement at the end of it. And apparently Peter's never seen an episode of The Bachelorette because he told Rachel that he's still not ready not ready for an engagement, because to him it means marriage right away.

In true Bachelorette fashion, Rachel might see Peter's emotions as a way of him opening up to her and their future even more and could very likely give him a fantasy suite date after all. So let's not lose hope yet of a Peter/Rachel endgame for the season.