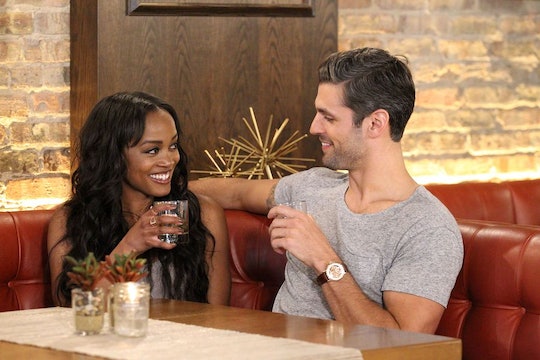 Rachel's Family May Feel Uncertain About Peter On 'The Bachelorette'

Ever since they attended BarkFest on The Bachelorette, Peter and Rachel seemed like they were ready to end the show and run off together for a Bachelor Nation happily ever after. But since the series needs a full season and that’s not really how this type of thing is supposed to play out, Rachel had to give every other guy a chance too. Now that we’re here, down to the remaining three men, Peter is still a strong contestant, but what does Rachel’s family think of Peter on The Bachelorette?

Their opinions are what will likely play a big role in whether or not he moves forward in the show or gets sent home before he gets the chance to propose. In the promo for Episode 9, where Rachel brings all three men home to Dallas to meet her family, there’s an awkward looking scene at the dinner table where Peter admits that he isn’t quite there yet. As in, to the point of marriage, which might be a red flag since that’s the whole endgame of this show. (Peter, I love you, but do you not understand how The Bachelorette works?)

Although her parents or siblings aren’t shown grilling Peter or questioning his relationship experience, we’re probably going to see some of that, since it's so close to the end of the season. And judging by Rachel’s Instagram, her family is super important to her, so what Rachel’s family thinks of Peter is going to make a huge difference for the Bachelorette.

In a birthday shoutout to her mom on Instagram back in January, Rachel called her an "amazing woman" and she regularly posts photos of herself with her nephews, so we know that family means a lot to Rachel. And since, in the promo for The Bachelorette Season 13 Episode 9, we see Rachel’s mom talking pretty openly to Bryan about their relationship, it's clear that she’s not going to be afraid to let her feelings be heard when it comes to Peter either. And when Peter tells Rachel’s family that he’s still on the fence about marriage in their near future, they’re definitely going to have some thoughts.

But since it’s Rachel’s decision in the end, her family will undoubtedly want to support her regardless, even if Peter might not be ready for marriage on The Bachelorette. What Rachel’s family thinks of Peter isn’t quite as important as what Rachel thinks herself, but their opinions are definitely going to sway the vote for him in the end.