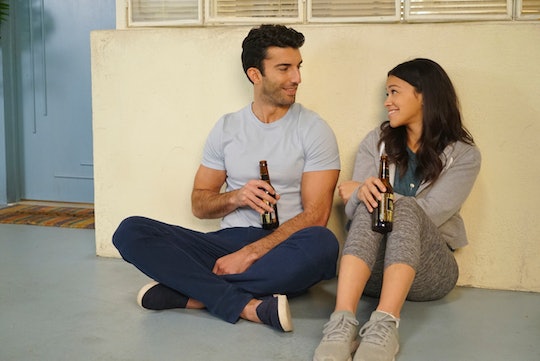 Jane The Virgin fans have been through a lot over five seasons of the show. But If you said Season 5 has been the most emotionally taxing of the series, I wouldn't disagree with you. Jane made her choice, finally! So now fans want to know — will Rafael take Jane back on Jane The Virgin?

Believe me when I say I wish I knew the answer. I've wanted Jane and Rafael to live happily ever after since the pilot episode. But that's an unrealistic wish for anyone to have. According to series creator Jennie Snyder Urman, different partners are right for people at different times in their lives. "But Jane really realizes that these five years and the changes that have happened have changed her, and Rafael is who she wants to be with," she told TV Guide in early May after Jane made her choice this season. "Whether he feels the same way is going to be up in the air, but that's where her heart is," Urman said.

I don't know about you but when I stumble across an unsatisfactory answer to a TV question I really want to know I start digging for clues, and don't worry there are a few out there. Jane's choice might feel sudden to some fans, but Urman has known what it would be since the series began. The goal was for both characters to grow into more mature adults on their individual journeys.

"I don't think [Rafael] was right for her in Season 1. I think we've really taken care to make him a person who's making different choices than he would have made when we began," Urman went on. "...I think he's really changed, and that's what we've been trying to do as writers for the past five years, is incrementally move him to a different place where Jane's values and Rafael's values about what's important — family, love, commitment, each other — lined up." Values are important to Jane. So, it seems significant that the show made the choice to move him farther away from the rich playboy he was and closer to Jane on the morals scale.

I saw evidence of this early in the season in flashbacks from before Michael was back when Rafael remembered the anniversary of Jane's book being published. What's a more romantic anniversary to a writer than that? Hint — there is none. Does that mean he will choose Jane? Not for sure. But I'm hopeful.

I'm also not done digging. Because on the episode where Jane makes her final choice Rafael says "it's too late" — and TV Guide asked Urman point blank if that was his final answer:

At the end of the episode he believes that. It's tricky because there's still many episodes to go [until the end of the season]. So watching her, what he thought, choose Michael — or not even choose him, just not automatically tell him to go — was really, really painful, and he, at this moment, is done with that story and feels like they should move on.

That, my friends, is not a definitive answer about Rafael's final answer. But, Jane still might get the happy ending she wants, and that's the one she deserves.