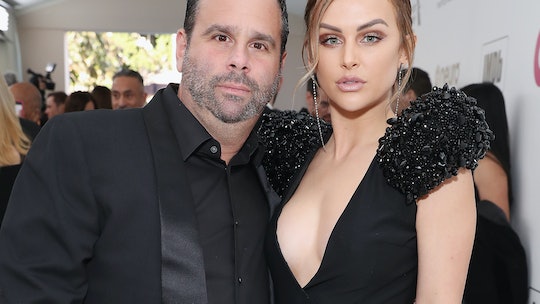 Wondering If Randall Will Ever Be On 'Vanderpump Rules'? Me Too

American film and television producer Randall Emmett has been a mystery to Vanderpump Rules fans since Lala Kent started referring to him as her "man" in Season 5. Although the couple is now engaged and fans are used to seeing the personal lives of their favorite reality stars spilled on camera, the enigmatic fiance has never been on the Bravo series. So will Randall ever be on Vanderpump Rules? Apparently, not.

Despite making cameos on reality shows like Flipping Out and Keeping Up with the Kardashians in the past, it looks like Randall won't appear on the Bravo series anytime soon. On the Vanderpump Rules reunion, Lala revealed why Randall hasn't been on Vanderpump Rules.

"Number one, I don't want him to be on it," Lala explained. "The things that go on during the show do get very real and nitty gritty."

That being said, Cohen pointed out that everyone on the show has put their relationships on display for the world to see and he questioned if Randall's secrecy on Vanderpump Rules was fair to the other cast members.

"I think I show quite a bit," Lala replied. But the Vanderpump Rules cast members were quick to snap back and even Lisa Vanderpump herself disagreed with Lala.

In response to Lala's comment, Tom Sandoval stated, "You get to keep a little extra locked away, versus us."

Scheana Shay then added that while she has no problem with Lala on Vanderpump Rules, she thinks that it's wrong that Lala hides her relationship from viewers.

"I think that everyone else gives 100," Scheana said. "As much as you are an amazing addition [to the show], I do think that it's unfair to give 100 percent."

Lala then retorted with, “Then find someone who has a career.” And no, the comment didn't sit well with the cast. Stassi Schroeder pointed out that the comment was rude and that her boyfriend, actor Beau Clark, is still able to appear on the show regardless of his status in the industry.

Meanwhile, Lala explained that Randall doesn't make up her entire life. "He's a huge part, but I still have other things that I share," Lala said.

Lisa then asked the cast if Randall got along with the rest of the cast and everyone seemed to agree that they were all on good terms.

"He doesn't interact with James Kennedy, but other than that," Brittany Cartwright chucked.

"Then he should show some of his life," Lisa concluded.

In the past, Lala has shared that she won't be showing her relationship on television — and that includes her highly anticipated wedding in April 2020.

While speaking to E! News, Lala explained that she will not be filming her nuptials for the Bravo series.

"My wedding will not be on Vanderpump Rules," Lala said. "I'm just funny about stuff like that. I want to keep it in my memory and I don't really care for it to be documented in that way."

While fans shouldn't expect anything to change anytime soon, will the altercation between Lala and the Vanderpump Rules cast push Lala and Randall to make their big reality television debut? For now, they're choosing to stay out of the spotlight for a number of reasons, and that should be enough for fans to respect the couple's decision to remain private.