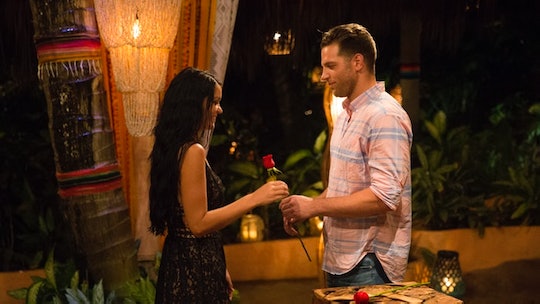 Raven & Adam Are Closer Than Ever After 'Bachelor In Paradise'

With so much talk about Derek and Taylor's relationship this season, some fans may have forgotten about the other couple who have managed to last the entire season with just a hiccup or two along the way. And now they've confirmed that they're still together, will Raven and Adam get married after Bachelor in Paradise? According to him, it's a very real possibility.

Throughout the season, there were a few contestants who kind of got in the way of Raven and Adam, like Robby and then Sarah, but clearly what Adam and Raven have is bigger than anyone else who may have had heart eyes for either of them. At the end of the season, Raven and Adam accepted the chance to have a fantasy suite date and although she had her own reservations about trusting someone after having her heart broken more than once, she agreed to it and from there, the relationship continued to flourish it seems.

And, as Adam told the camera after their fantasy suite date, he can see himself and Raven as the next Evan and Carly, in a way, and that an engagement isn't out of the question if they continue in the way they have.

During the Bachelor in Paradise after show Monday night, Adam revealed that since filming ended for the season, he and Raven have traveled all over, from San Fransisco to the Dominican Republic and that "It's so fun to have her a part of [my life]."

Raven then revealed that the couple had plans to have her meet his family over the weekend and a minute later, her own parents popped up on stage for what was probably the most awkward first meeting of the parents ever. But with Raven and Adam, it kind of worked.

Adam might not have proposed on Bachelor in Paradise this season or even on the after show special, but he did make it clear that being with Raven is definitely a priority for him and that a future wedding is totally possible. Which, by all accounts, is as reasonable and realistic as you can get after finding love on reality TV.

Next to Derek and Taylor's tear-inducing interaction and subsequent proposal on the Bachelor in Paradise after show, watching Raven and Adam as a real life couple made all of the drama, heartache, and love triangles of the season totally worth it. Ring or not, they're definitely the real deal.