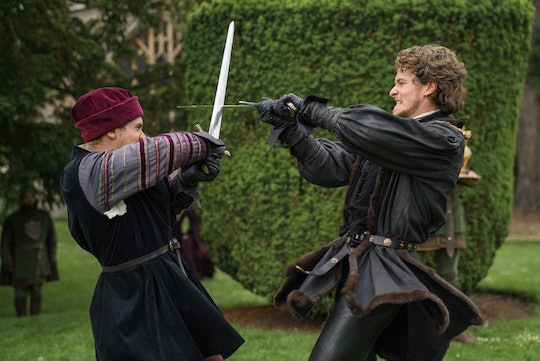 Back in the 1400s, family feuds weren't fought over Facebook. There was no Jerry Springer to solve problems. Instead, they had wars that lasted thirty years and resulted in a change of power for their whole country. Much more sensible, right? The events of the War of the Roses all occurred before those of The White Princess started, but its impact still ripples throughout the show. On Sunday's episode, "The Pretender," Elizabeth's brother returned after presumed dead. So will Richard fight Henry on The White Princess? His survival means the crown is up for grabs.

Viewers can't look at history for spoilers on this one. Richard, Elizabeth's brother, did not return in a surprising cliffhanger. Richard of Shrewsbury, Duke of York was one of the two Princes in the Tower along with his brother, Edward V. They were 9 and 12 years old, respectfully, when they were killed in the Tower of London. The rub is, their deaths remain a mystery. According to the Independent there are a few theories as to whom was responsible. Their uncle, Richard III, is one because he escorted Edward V to the tower. Henry VI is another suspect because he was afraid they may threaten his throne. Richard III couldn't be the killer in The White Princess universe because he was killed before the younger Richard disappeared.

As it turns out, none of the theories work in the Princess universe because Richard isn't dead! He went into hiding in the premiere episode and was presumed dead, but here he has returned to the palace. Given the deviation from history, it's pretty difficult to predict what will happen. Will Richard fight Henry for the throne? He may think it rightfully belongs to York. It could certainly happen, especially because another young York — Teddy — made it clear that he was not happy with Henry on the throne.

Henry sensed Teddy's animosity; that, combined with public adoration of him, made him lock Teddy in the Tower of London. This may also happen to Richard on The White Princess too, if word of his survival got out. Except, Richard is Elizabeth's brother, so she may not stand for it. She is already upset that Teddy is there. The White Princess definitely provided an interesting shake-up to history, and maybe the titular princess may not be queen much longer if her brother takes the reigns. Viewers will have to keep watching to find out where this history redux goes.