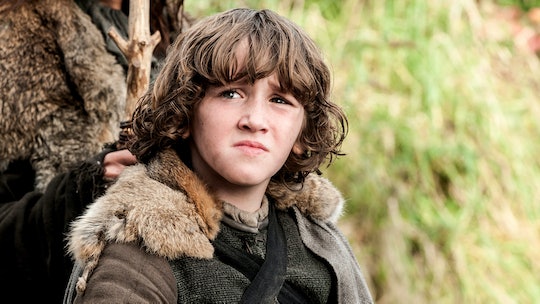 Will Rickon Stark Return To 'Game Of Thrones' Season 6? It Looks Promising

Although Bran Stark missed the entire last season of Game of Thrones, he's not the most obscure Stark. That title belongs to the youngest Stark, Rickon. The last time we saw Rickon was back in Season 3 when Bran sent him, along with Osha — the Wildling turned Stark servant — to Last Hearth, the home of the House Umber. The lord there, Greatjon Umber, is a loyal bannerman of the Starks and as Bran told Rickon, if Robb died (which he did) and Bran died, Rickon would be the only heir to Winterfell left and he therefore needed to be protected. But will Rickon Stark return to Game of Thrones Season 6?

Currently it's unclear if Bran's plan for Rickon was successful. In Season 4, Bran did his part of keeping Rickon safe by killing Roose Bolton's hunter, Locke, who was sent to kill Bran and Rickon. Besides that, we have no knowledge of any other threats to Rickon and Osha since we haven't seen them in the past few seasons.

However, we have good reason to believe both Rickon and Osha will be returning to Game of Thrones this season, and fans are certainly hoping that Art Parkinson and Natalia Thena (Rickon and Osha, respectively) will be in the upcoming season.

But, with their return comes a lot of questions. Did they make it to Last Hearth? Was it really safe for Rickon there, or is his life in danger once again? Now that Sansa has escaped Winterfell, will she be able to find her brother? Can they take back Winterfell? Well, if you read the Game of Thrones books you may think you have some idea of what happened to Rickon, but as we've come to learn the show tends to go their own way when it comes to the books. And now that the show has caught up with/surpassed the source material, anything could happen.

My best guess is Rickon and Osha are indeed at Last Hearth and Sansa will probably spend most of Season 6 looking for her brothers now that she knows they're alive. Since we haven't heard anything about Rickon in a while, if he's at Last Hearth he's being kept a secret, which makes sense since a lot of people want him dead.