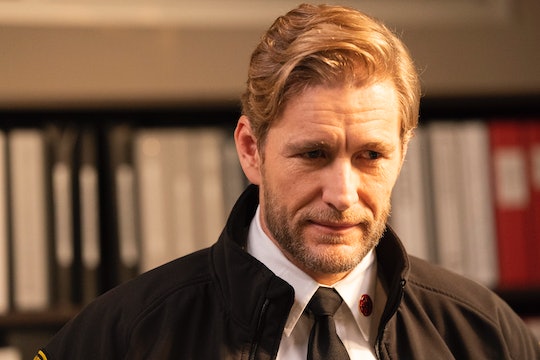 Nothing says an epic Grey’s Anatomy and Station 19 crossover like a big character death, but let’s hope that’s not the case for Ripley in the last crossover event of the season. The incident that leads to him showing up at the Grey Sloan Memorial Hospital involved Ripley hitting his head, so it’s unlikely that he has something serious like cancer to contend with. But will Ripley die on Station 19 just when things are on the straight and narrow with Vic? It would be seriously heartbreaking if now, when they are finally ready to go public with their relationship, he up and dies, leaving Vic to wallow is her devastation. I’m not wild about seeing her like that, so hopefully this is just a red herring to make the two love birds realize just how much they love each other.

The timing couldn't be worse for Ripley’s health to be in serious danger but, judging from the preview for tonight’s crossover episode, that might be the case. He hit his head in a flower shop on Station 19, but what the doctors find while examining him could be something much worse. In the preview, Maggie tells Ripley that his heart could stop if he leaves the hospital without being treated. There’s a chance, then, that he had a preexisting condition he didn't know about that will now need to be handled before he can be at 100 percent again. That’s not the worst scenario, so from where I’m standing, there’s hope that Ripley will pull through.

In April, Barrett Doss, who plays Vic, spoke to Hollywood Life about what’s in store for Vic for the rest of the season and promised some obstacles on her own before the season is over. She said that Vic is "going to face a lot of challenges this season that are going to help her become the woman she always wanted to be." It’s unclear if one of those challenges is losing Ripley or just growing from almost losing him, but let’s hope it’s the latter.

Doss also said that she sees Vic and Ripley as a strong couple. "I think these two people are really uniquely suited to each other," she said at the time. "Even though it was sort of an unexpected match, I think it’s a good match, and I think they both feel like that." Hopefully that means Ripley doesn't die on Station 19 and that he has many more remaining years to be a pain in Vic’s backside, and vice versa.

As is the case with Grey’s Anatomy, there are only three episodes of Station 19 left this season, so if Ripley does die, those will be a somber three episodes and I can't see that happening. Usually, big deaths are reserved for season finales and since Ripley is at least awake in the preview for tonight’s episode, I think he still has some fight left in him.

This might even be a blessing in disguise. One of Ripley’s problems with going public about his relationship with Vic was that he didn't know how their colleagues would take their romance, given that he is her superior. If Ripley’s potential heart condition forces him to step down for a little while, it might be a little easier to be open about his relationship with Vic so they can move forward together.

Maybe I’m just a romantic when it comes to Shondaland, but I refuse to believe that Ripley and Vic would be hit this hard so early in their relationship. I feel like Ripley might need some time to recover or work through whatever heart problem he may have, but I don't think he’s knocking on death’s door.