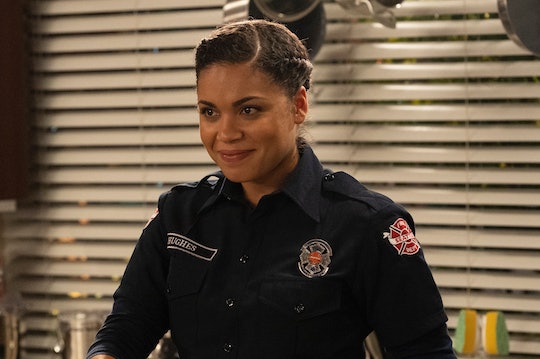 Vic & Ripley Could Actually Tie The Knot On 'Station 19'

Lately, Station 19 is all about the secret romances and I can't say I hate it. But with Maya and Jack hooking up in supply closets and Ripley and Vic’s secret romance in full swing, it’s getting to be a lot. So much so that eventually, everyone is going to have to come clean or risk getting exposed in the worst way. Ripley’s response to this is proposing, but will Ripley and Vic get married on Station 19?

They don't seem like they are in any place to tie the knot, especially since they have kept their relationship on the down-low for so long, but in the preview for tonight’s episode, Ripley’s solution to dealing with a potential scandal is to marry Vic and get out ahead of it. Maybe his logic is that two firefighters falling for each other and getting married sounds a lot better than one station chief hooking up with a subordinate in secret. It makes sense to an extent, but that’s a big step for any relationship, let alone one that hasn't even gone public yet.

In recent episodes, Vic was bogged down by the fact that Ripley has chosen to keep their relationship secret to protect both of their careers. The scandal could potentially negatively affect them both and you just can't help feel for Vic, who has clearly fallen for the guy. I could see her agreeing to this misguided marriage proposal, but it’s hard to say if they will actually go through with it.

Vic has said on more than one occasion that she doesn't like keeping their relationship secret and that it almost makes her feel dirty that he seems to be ashamed of her. I don't think it’s about shame as much as it is about a fear of being punished for an inappropriate workplace romantic relationship, so maybe Ripley does have a point. This is the first time he has finally shown any inkling of wanting to take their relationship public, though, so Vic might grab onto this opportunity even if it means getting married to someone she hasn't even told all of her friends about.

Despite some bumps in the road so far, Ripley and Vic have proven that their relationship is more than hookups at the station when no one is around and secret rendezvous behind everyone’s back. It wouldn't be the worst thing in the world to see them get married, if only to make their relationship easier moving forward. But as it stands, Ripley’s proposal will either make or break them. They will either agree to do it and move forward or Vic will say no and they will call it quits to keep their jobs in tact.

At the very least, Station 19 fans seem to be into it. It might have taken a little while for viewers to warm on Ripley, but his relationship with Vic has shown another side of him and they seem to work as a couple. Obviously fan reaction isn't everything, but if Station 19 fans are shipping Ripley and Vic as a married couple it could happen. If nothing else, it will give the show more drama before Season 2 ends or a cliffhanger wedding that TGIT shows are known for.

Ripley’s proposal will probably shock Vic into uncharacteristic silence for a little while before she makes her decision, but it may not be the best plan. A spur of the moment wedding is never a good idea, especially on TV, and it probably isn't the best solution for a couple who has already had their doubts about their relationship.