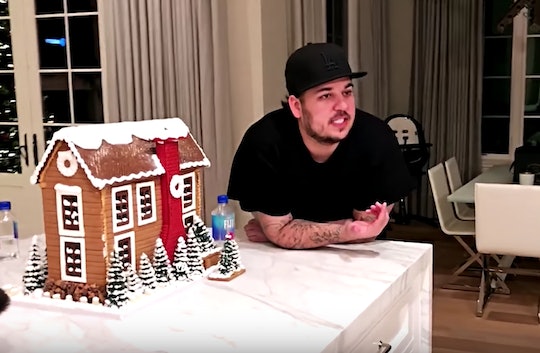 Where In The World Is Rob Kardashian In The Kardashian Christmas Card?!

As previously stated, family members have been releasing photos from the Christmas card each day throughout the month of December and the photos have been super family centric. In the photos, Kim Kim, Kourtney, and Rob's children run around and pose with their aunts. With everyone dressed in their blue denim and white outfits, they look super casual and relaxed.

But with the unveiling of the Kardashian's second-to-last Christmas card reveal of 2017, two very important people are missing from the photo and have been missing from the card so far: the reportedly pregnant and youngest Kardashian sister, Kylie Jenner, and her older brother, Rob Kardashian. So where is Rob? And will he ever make it into the card tomorrow? There is a chance but there really is no telling if he will appear.

But there are a few signs pointing to Rob not showing up in this year's card. Practically everyone is expecting Kylie to unveil her pregnancy by making an appearance in tomorrow's Christmas card photo. If this is the case, then one would expect the attention to be just on Kylie and her huge news; not Kylie and Rob. But if the final Christmas card picture, is a full family photo, then Rob can easily make an appearance there.

If Rob isn't in this year's Christmas card, then it wouldn't be the first time that he was absent from family festivities. In 2014, Rob refused to attend Kim's wedding to Kanye West and, according to People, and spent nearly two years living out of the spotlight. In 2016, Rob told People that this was a decision made due to the fact that he was unhappy with his appearance and the way he looked on camera. Because of this, he continued to skip out on "Christmases and birthdays and vacations," according to People. Rob continued, saying:

I just wasn't down to have photographers follow me, so I made sure I was away from all of that. I'm very good at disappearing. I wasn't happy with myself so I didn't want my family to see me in that way. [Khloé and I] butt heads about it. She's all about "your biggest revenge is your body," and I'm trying to find happiness in my own way.

In the same interview, Rob told People that he still isn't happy with "looking at himself in the mirror" but he is "working towards that." If he doesn't appear in the Christmas card, it could very well be for a reason like this. And that is a decision that fans will have to respect.